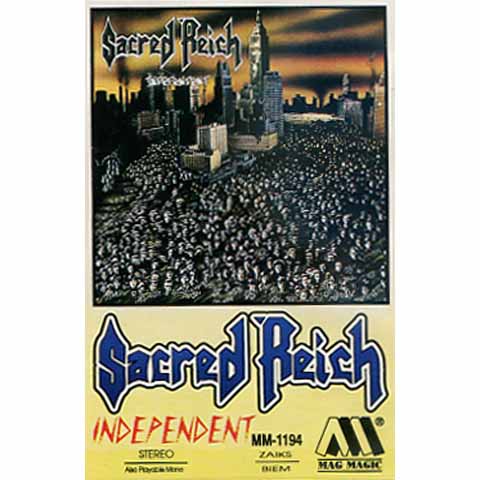 Poland is probably the country that had the most record labels in the world that only released cassettes. But even though there were lots of labels the market was still small as they only printed these for their own market inside of Poland. And a label in one town maybe lacked the distribution for another town and so on. A Warzaw or Krakow label might print more copies of a tape then labels from a smaller town. So even if there are thousands of releases you will notice how rare some are if you start to try to list the catalog number of one particular label. Some cassettes just rarely shows up. Most Polish cassette labels disappeared in May of 1994 when Polish Parliament passed on a new copyright law. Mag Magic was a label that managed to release way over a thousand tapes so they were very active up to 1994. Mag Magic were one of the better labels as most of their releases had excellent sound.

Arizona political thrashers Sacred Reich seemed all set to explode after the success of their 1990 opus The American Way. But almost three years would go by before anything was heard from them again, and by the time they finally returned with 1993’s Independent, their momentum was lost and thrash metal in general was pretty much yesterday’s news. Not that you’d be able to tell from Independent’s first two songs: The title track (featuring a guitar riff so good, they used it twice on the same record — simply slowing it down for “Open Book”) is a sarcastic onslaught the likes of which no band could do as well as the Reich, and “Free” follows suit with its equally powerful and ironic social commentary. But the songwriting takes a sharp dip in quality from there, and Phil Rind and company waste endless time on increasingly pedestrian mid-tempo protest moshers. In fact, variety only makes a belated return on the aforementioned “Open Book” and “I Never Said Goodbye” — an epic power metal ballad very uncharacteristic of the Reich, but quite good nonetheless. Not exactly an essential release, but it’ll do the trick for Sacred Reich fanatics.