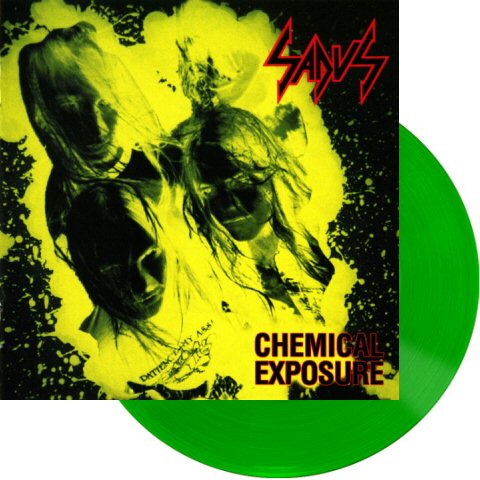 Although it is often mistaken to be Sadus’ second album, 1991’s Chemical Exposure is actually their first, having been released independently by the band back in 1988 (under the title of Illusions) — before their association with Roadrunner led to its renaming and reissue three years later. In every other respect, however, the two albums are one and the same, but let’s backtrack a bit. Produced by Metal Church guitarist John Marshall, Chemical Exposure was initially and understandably considered yet another Bay Area thrash metal album — though a very accomplished one at that, and bolstered by an unusually clear sound for an independent release. Yet, in retrospect, the album stood balanced on a knife’s edge between the already fading (though few were aware of it) thrash scene and the death metal movement about to replace it. Indeed, much like Sepultura’s similarly transitioning (and astonishing) Schizophrenia LP of 1987, key Chemical Exposure tracks like “Certain Death,” “Torture,” “Fight or Die,” and even the rather funny “Sadus Attack” still played by the former style’s unfailingly frantic, break-neck speed rules, rarely ever slowing down to preempt the latter’s greater dynamic diversity. But the young Sadus players’ already awesome technical abilities clearly belonged with the next generation of post-thrash deathsters, and their jaw-dropping displays on additional offerings like “Torture,” “Illusions,” and the title cut boasted a slew of escalating songwriting and performance complexities that were quite beyond the earlier Bay Area scene’s limits. Actually, if there’s any one thing hindering Sadus’ inclusion with the next wave, it would be Darren Travis’ screaming/spitting lead vocal style, which, though hardly musical in nature, still derived from earlier thrash frontmen such as Slayer’s Tom Araya and Kreator’s Mille Petrozza (see the very Kreator-like “Hands of Fate,” another old demo reworked), instead of the Cookie Monster growl typical of death metal. Nevertheless, and regardless of all this mostly academic, cross-subgenre debate, the fact is Chemical Exposure was a very fine debut — fine enough to merit two releases obviously.