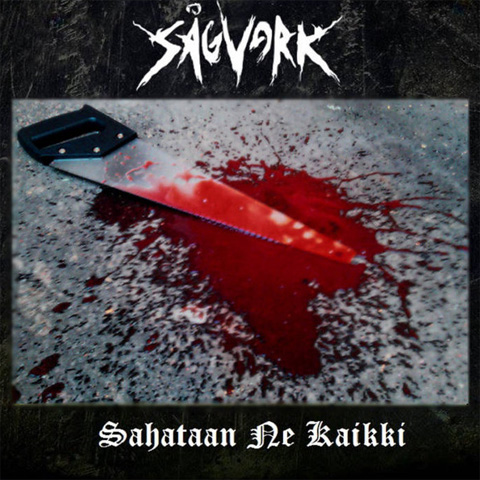 This is the debut album from Finnish Black n Rollers Sagverk (Swedish from sawmill). Angry, Crust-fuelled Black Metal with a modern rocking aspect and plenty of attitude; Sagverk make this kind of music look easy, but also offer up something a bit different. There are 8 tracks of blackened belligerence and groove here, comprising 7 originals and a Metallica cover of Motorbreath. Buzzsaw riffs and brutal guitars power the songs, but theres a lot more control here than I was expecting to hear. The tracks are written with more than just black metal in mind – as well as the punk/crust theres a bit of a stoner vibe to some of the riffs, making Sahataan Ne Kaikki a bit different from the norm. The songs are well-written and make use of a strong riff-oriented approach. This is not a release that’s top-speed all of the time, but nonetheless maintains a high energy throughout. The vocals are shouted screams that vary in tone and delivery a fair deal. Cleans are also used sparingly but it’s mainly all about the shouting. The singer plays his part well and gives a good performance. The band have a very clean and clear sound; again, a bit different form the norm as this kind of crusty, blackened assault is usually a lot dirtier in delivery. It works though and allows the rockier aspects to their style to come to the fore. This is a really interesting release that smashes my preconceptions about what black n roll can sound like. If you imagine a black metal/crust/punk hybrid, the likes of which we see relatively often, then make their sound cleaner and add in a combination of Kvelertak with a bit of (old) Mastodon to the riffs then Sagverk will be the end result. Enjoyable and different, Sahataan Ne Kaikki is a really good listen. Highly recommended.