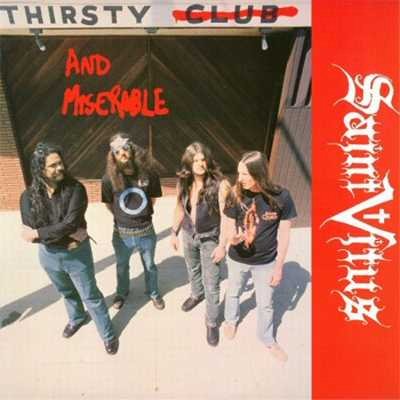 This is a very interesting little EP for historical as well as musical reasons. Musically, it offers three solid and distinct songs. However, without any historical background on the band, it seems a strange decision for such an incredibly slow, traditional doom metal band to cover a Black Flag song, even if the lyrics for the song are bleak enough to provide some justification. Apparently, though, Vitus often played with punk bands during their early career because they happened to be signed to a punk label. Needless to say, this didnï¿½t always work out so well for Vitus as punks tended to really hate them. With Thirsty and Miserable, though, the band really managed to make lemonade out of the proverbial lemons their early career dealt them. The simple, straightforward riffing may demonstrate the songï¿½s punk origin and, in my mind, isnï¿½t quite as compelling as Vitus own compositions but the vocal delivery, doomy tone and Chandlerï¿½s psychedelic leads improve a decent punk song and make it fit in Vitusï¿½s own catalogue. Thereï¿½s not much to say about the song in the end, other than that itï¿½s a great straightforward, doomed-up punk song. Itï¿½s easily the best doom cover of a punk song Iï¿½ve ever heard, considering the relative scarcity of any competition. The rest of the EP is made up of two Vitus originals, Look Behind You and The End of the End. The former is a relatively simple, catchy St. Vitus song. Itï¿½s not, perhaps, one of the greatest Vitus songs as it is relatively mindless, but paranoia has rarely been so fun. The chorus will undoubtedly stick with you. All of the elements of effective St. Vitus songs are there but, aside from the vocals, theyï¿½re not at their most impressive or memorable in this track. The closer, appropriately entitled The End of the End, is undoubtedly the highlight. The riffs and guitar leads are extremely moody and the song structure, straightforward and conventional though it may be, is brilliantly accentuated by the significant changes in tempo, which keep the song interesting. It all seems to build a sense of contempt which matches the lyrics disdain for humanity in an apocalyptic world. Wino could have expressed a bit more attitude in this song but itï¿½s still a great song. If his performance were just a bit more memorable, this song might even have been as significant as Born Too Late. The main shortcoming on this release is its length. Clocking in at less than fourteen minutes long, it seems pretty hard to justify buying it on its own but if youre a collector you still want to own this release on vinyl

Track listing:
1. The End Of The End
2. Thirsty And Miserable-Black Flag cover
3. Look Behind You