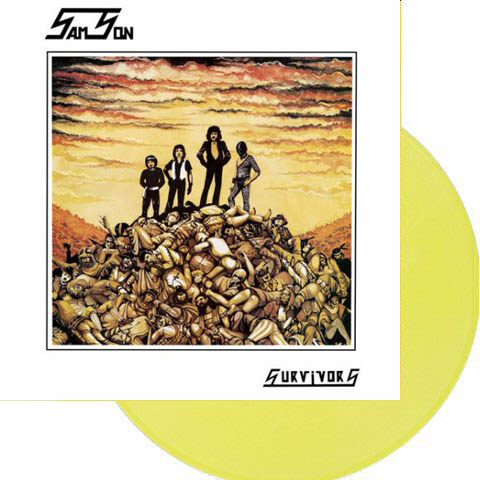 Although his name is listed in the credits and his image appears to be on the front cover (standing atop such deceased notable figures as Jimi Hendrix, Jesus Christ, Elvis, and Hitler!), Bruce Dickinson was not in Samson when their 1979 debut, Survivors, was recorded. The band was a trio at this point, consisting of Paul Samson on vocals and guitar, bassist Chris Aylmer, and masked drummer Barry “Thunderstick'” Graham. The band’s sound isn’t far off from what they would sound like with Dickinson on vocals (Head On, Shock Tactics, etc.) — perhaps bluesier, but still comparable to other New Wave of British Heavy Metal bands that were beginning to rule the world around this time (Judas Priest, Motorhead, Iron Maiden, Def Leppard, etc.). Such riff-rockers as the album-opening “It’s Not as Easy as It Seems” and “Big Brother” prove to be highlights, and like most other Samson recordings, at least one song belongs in the Spinal Tap hall of fame. This time, it’s “I Wish I Was the Saddle of a Schoolgirl’s Bike.”