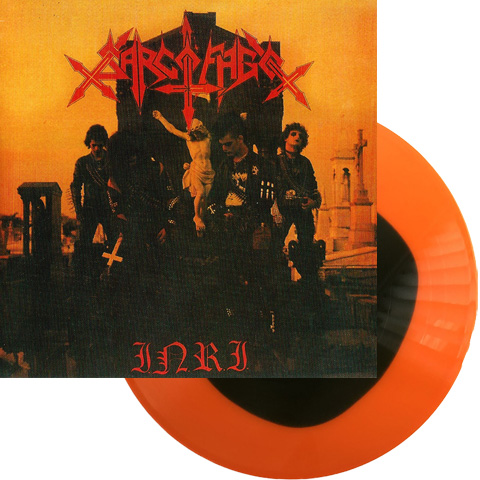 Us pressing with orange cover artwork on orange with black haze vinyl with 4 page insert and poster.

Brazil’s Sarcófago rank among the more notorious also-rans in the South American nation’s first wave of extreme metal bands. This country’s full-fledged underground movement may have only spawned one significant megastar in the international arena, that being the legendary Sepultura, but, ironically, Sepultura is where Sarcófago main man “Antichrist” (aka Wagner Lamounier) actually got his start. Kicked out of the band before they’d recorded a single note, Lamounier founded Sarcófago with the express mission of out-doing his former friends, now rivals, dedicating himself to composing songs and lyrics of the most violent and scatological nature imaginable. Clearly he failed in terms of commercial success, but Sarcófago’s 1987 debut, I.N.R.I. remains an oft-referenced touchstone for black metal musicians worldwide. Named after the inscription supposedly written by Pontius Pilate over the head of Jesus Christ on the cross (“Jesus of Nazareth, King of the Jews”), the record boasted a very primitive, uneven set of hardcore-tinged black and death metal lasting barely half-an-hour. Needless to say, things like finesse and production standards were not to be found here, and the album’s uncredited use of a drum machine was another potential sticking point, but really not quite as troublesome as the band’s overall inability to program it convincingly. Even so, it’s hard to argue with Sarcófago’s lustful enthusiasm throughout this set, which elevates semi-competent, Beelzebub-inspired ditties like “Satanic Lust,” “Nightmare” and “Deathtrash” to an altogether more intense and undeniably entertaining plateau. I.N.R.I. is at once retroactively flawed by modern death metal standards, and a work of remarkable vision from a purely black metal perspective. Some might feel compelled to write it off as a good cautionary tale for blasting Celtic Frost in your Walkman while baking your coconut in the tropical sun, but any serious metal enthusiast worth his salt will recognize I.N.R.I. as a historical relic of an obscure but important national scene.