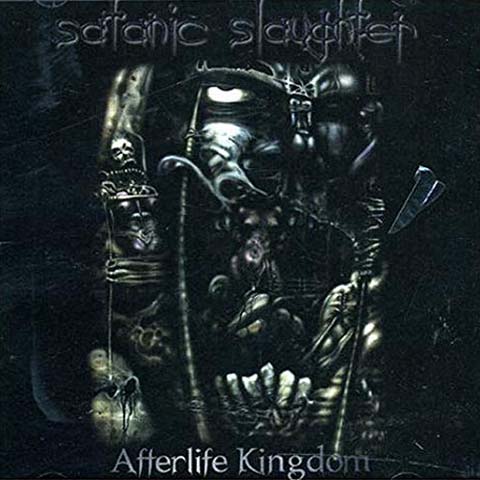 Linkoping’s Satanic Slaughter is one of Scandinavia’s older black death metal acts having formed in 1985. Previous to this date the band went under the politically incorrect name of Evil Cunt. Of the original line-up, only the Orchriste credited guitarist Ztephan Dark Karlsson remained. Original bassist Goat became a pyromaniac and now reportedly resides in a mental hospital. Satanic Slaughters name was first felt on the Swedish metal scene in 1985. Joining Ztephan Dark would be vocalist Moto Jacobsson, bassist Ron B. Goat and Total Death drummer Pontus Sjosten. The bands third album ‘Afterlife Kingdom’ was released in 2000 and featured Ztephan Dark on guitar, Andreas Deblen (Host, Deranged, Morgue) on vocals, Kecke Ljungberg (Morgue) on guitar, Filip Carlsson (Host, Corporation 187, Thornclad) on bass and Roberg Eng (Host, Corporation 187) on drums. This album got the band out on tour across Europe in alliance with Norwegian act Ragnarok in December. The album starts off with a rather short intro that later turns into a violent and furious death metal-spiced black metal album that ends with a brilliant cover of Kreators ‘Flag Of Hate’. If you compares this to ‘Land Of The Unholy Souls’, their former album (1997, Necropolis Records) then it feels like this album has a better recording and it features some keyboard passages here and there and some incredible lead guitar. This is the most exciting and mature work the band has managed to unleash so far. ‘Afterlife Kingdom’ showed that Satanic Slaughter just got better and better with each album to bad it only was one more before band leader Ztephan Dark passed away in April 2006.