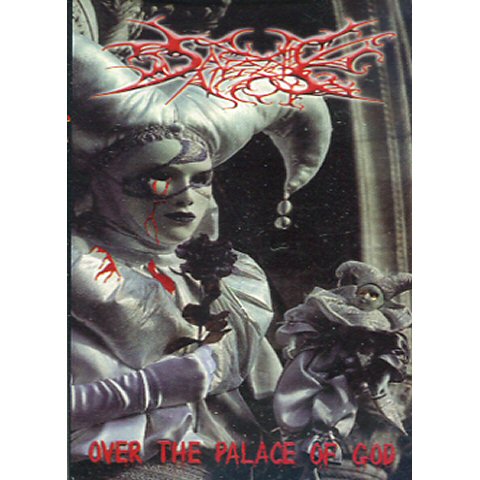 Official Turkish licensed pressed cassette on Yucel Muzik. Yucel was a small underground cassette label that released 21 cassettes between 1998 and 2001, before calling it a day. Clear cassette with grey text

At the time of the Norwegian church burnings, Turkish black metal was still in its infancy. However, the notorious events surrounding Mayhem, Burzum and Emperor were known to the Turkish scene and the second ever foreign metal band to play live in Turkey was Mayhem. This happened in Izmir back in December of 1990, which means it was the classic line-up of Dead, Euronymous, Necrobutcher and Hellhammer. One of the first bands to were corpse-pain in Turkey was Witchtrap from Ankara and they emerged from the pre-Norwegian era and was influenced by Venom, Bathory and Celtic Frost. They are often mentioned as the very first black metal band of Turkey. More would follow, like Satanized from Istanbul, Funeralmoon and Leviathan from Izmir and Sarcophagus and Satanic Verses from Ankara. The band Satanic Verses was formed in 1996 taking their name from Salman Rushhdie’s book The Satanic Verses. The book had stirred up big protests and huge book burnings all over the world and Turkey was the only Muslim country where the book remained quietly legal even though the country had sign the Organisation of the Islamic Conference calling for a ban of the book. But i dont think the band knew how much they would limited themselves by taking on such a name. It literally meant that you would have a hard time getting gigs, record deals, distribution etc and putting up a poster with your band name could be life threading. Overall playing black metal in a Muslim country is problematic. Turkey never had any big black metal acts instead it was other extreme metal acts like Pentagram, that played thrash death, that avoided anti religious symbols and messages that was the driving force on the national metal scene. Satanic Verses released two demos during their first two years of existence. 600 km from Ankara in the harbour town of Izmir a young Yucel Sahinbeyoglu is about to start a cassette label. And in 1998 Yucel Muzik makes their first release and its the album Over The Palace Of God by Satanic Verses. This 10-track cassette, featuring two old re-recorded demo tracks, was the only real full length release the band ever did. The band would struggle on for 7 more years, releasing a cassette EP and a split Cd, before realizing that a name change could help them out. So the band became Sheltersiege where they released another full length album on Dark Babel records in 2010. If you want to check out a black metal band that can rock as extreme as their Nordic comrades then check out Satanic Verses. You wont regret it