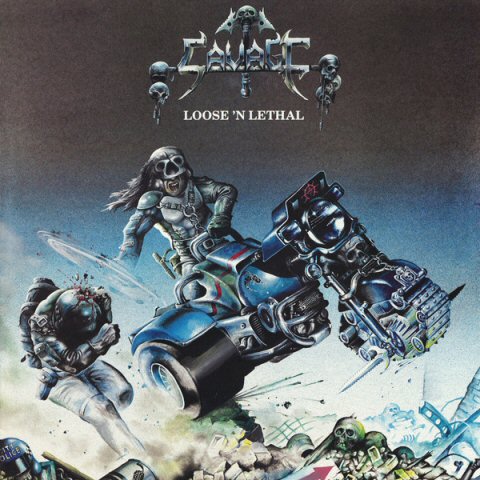 When it was finally released in 1983 by (very) independent Ebony Records, Savage’s Loose’n’Lethal was a walking, breathing musical anachronism. Containing a batch of songs which had been stewing for years as the band slogged unknown through local pubs and clubs, desperately looking for a break, it was a direct throwback to 1980, when the New Wave of British Heavy Metal (which had spawned the group) was in full-flight and dominating the U.K.’s music weeklies. But by the time of its belated release, musical tastes had evolved considerably and the original onslaught of NWOBHM bands had been decimated by time and failed returns, leaving only a few major players like the unstoppable Iron Maiden, the fast-rising Def Leppard, and the still going strong Saxon still prospering in its wake. There was therefore little hope for a rough and tumble group like Savage to make any serious headway, no matter how energetic and exciting their sound. Proudly wearing their humongous debt to Judas Priest on their sleeves, the quartet were hardly reinventing the wheel here either, but despite their vaguely familiar riffs, solid heavy metal anthems like ‘Let It Loose’, ‘Cry Wolf’, ‘The China Run’ and ‘Back On The Road’ still manage to entertain. These great tracks couldn’t save the band at the time but looking back on the album today it’s a classic Nwobhm album that deserves to be in most heavy metal collections. If it had come out two-three years earlier it could have been groundbreaking instead of just a small footnote in heavy metal lore.