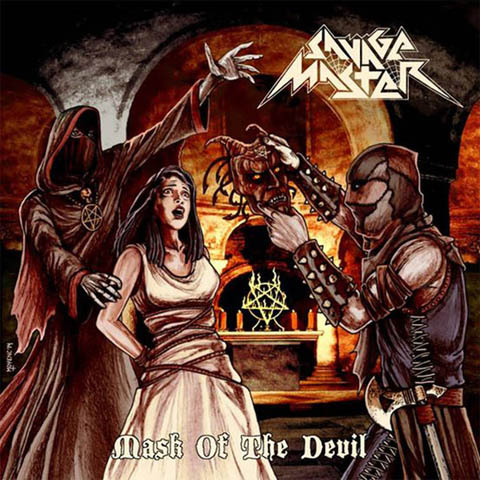 Hailing from Kentucky, Savage Master is a true Heavy Metal band that started in October of 2013, unleashing their debut album Mask Of The Devil in a relatively short period of time 12 months after their formation. What is refreshing regarding the sound of this release is the lack of sonic squashing or digital editing bringing back the ethics of the old school in terms of raw, real tones unchanged with extra studio or computer tricks. Female singer Stacey Peak has that haunting, eerie edge to her screams and natural delivery that will make most think of older Leather Leone or possibly Debbie Gunn lethal and deadly right from the start on Blood on the Rose. A lot of the guitar riffs and general song structures remind me of the early Metal Massacre series of bands through Metal Blade bands who took the NWOBHM style into sometimes rawer, more powerful, or speedier terrain. If you listen closely youll hear some tips of the cap to Accept on The Ripper Is Black (the main Myers/ McManus rhythm a dead ringer for Demons Night) or doom overtones for Black Sabbath within Altar Of Lust where Stacey reaches weird cackling range during the verses. The album closes on a fast and furious note through Death Rides The Highway double bass and ripping speed the game plan a la Exciter or early Hallows Eve. Favourites include the Grim Reaper-esque The Mystifying Oracle and four on the floor anthem Marry The Wolf. At 28 minutes the record does fly by quick, but wouldnt you rather leave them lusting for more than overstay your welcome? Savage Master are off to a strong start, and should sustain a healthy buzz through the True/ Traditional Metal camps.

Track listing:
1. Blood On The Rose
2. The Mystifying Oracle
3. Mask Of The Devil
4. The Ripper In Black
5. Kill Without Warning
6. Marry The Wolf
7. Altar Of Lust
8. Death Rides The Highway