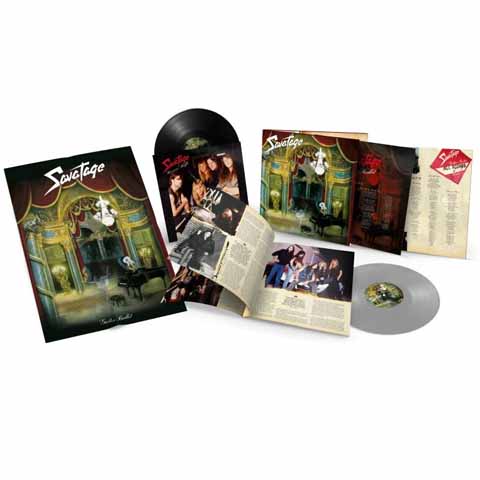 The sixth studio album was a true turning point for the band, for after Jon Oliva watched ‘The Phantom Of The Opera’ in Toronto, he decided to change the sound of the band, from a heavy metal to a more progressive sound, which is reflected in songs such as ‘When The Crowds Are Gone’ and ‘Gutter Ballet’. The final three songs (’Mentally Yours’, ‘Summer’s Rain’, ‘Thorazine Shuffle’) are a conceptual suite dealing with a single character as revealed by the band in interviews. The original title for the record was ‘Temptation Revelation’, but this was changed to ‘Hounds Of Zaroff’ which was a Steve Wacholz suggestion. As late as May 1989, the band was having doubts surrounding the title. At the time, the eventual title track of the album had not been written. The title, ‘Gutter Ballet’ was in-fact the title of a play Paul O’Neill had written ten years earlier that would later make-up the majority of the band’s next work, ‘Streets’. In fact, ‘Gutter Ballet’ was written with just Jon, Criss and Paul in the studio. Jon’s drumming skill was competent enough to perform on the track and Jon also provided the bass guitar duties for the track. This time the band co-wrote all their material with producer Paul O’ Neill, and the songwriting on ‘Gutter Ballet’ is leaps and bounds ahead of almost anything the group had recorded before. The arrangements are more complex, while O’ Neill’s production and the addition of Chris Caffery as a second guitarist added new depth to the band’s sound. Criss Oliva’s guitar playing improved, as well, and his beautiful acoustic instrumental, ‘Silk And Steel’ is a highlight on the album.