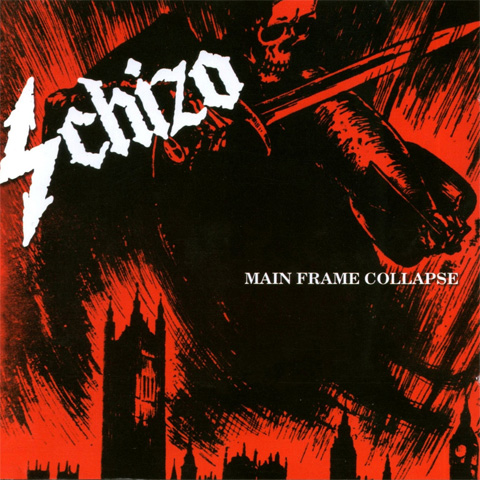 Italy always had a good underground extreme metal scene, featuring cult names like Necrodeath, Bulldozer, Mortuary Drape, Sadist, Electrocution, or more recent names like Fleshgod Apocalypse, Hour of Penance, Aborym, Bunker 66, Satanika, Inchiuvatu, Baphomet’s Blood and so on. But among the best bands that Italy ever produced is the legendary cult band Schizo, from Catania (Sicily). Born from the insane minds of S.B. Reder, Alberto Penzin and Angel Puglisi (the latter stayed in the band for a very short time), Schizo is considered, along with Necrodeath and Bulldozer, the most important italian thrash band; nevertheless, differently from Necrodeath, they never had the right recognition from the metal scene, despite being influential even on famous international acts like Sepultura, Darkthrone, Cradle of Filth (believe it or not, Dani Filth was a huge fan of them back in the day) and the whole Swedish old school death metal scene. In their first years of activity, Schizo raised a lot of good response in the underground with the Total Schizophrenia demo. Their main influences were early 80s extreme metal like Venom, Sodom, Hellhammer, Celtic Frost and old school hardcore like Discharge (whose influence was more evident on the Thrash the Unthrashable – Thrash to Kill demo). After a little rehearsal demo released in 1987 (where S.B. Reder was the only vocalist), Necrodeath’s vocalist Ingo joined them (they initially asked Chuck Schuldiner, but he had to record Leprosy ahead of schedule and couldn’t take part in Schizo’s plans) and, in 1989, they finally unleashed their beast from the recording studio: the Main Frame Collapse full-length. A total masterpiece, imagine a punkier and rawer version of Necrodeath’s first two legendary full-lenghts. Well, we’re pretty there. This album is a lethal injection of death/thrash with hardcore influences and an occasional early black metal vibe (even if less atmospheric and more straight-to-the-point than Necrodeath). Extreme blast-beats, fast and intense riffs which reek of insanity, schizophrenia and all the possible kinds of mental illness, and then, Ingo, one of the best extreme metal singers ever: his vocals are not growls, not screams, not simple shouts, not though-guy vocals, they are just evil and mean as you couldn’t imagine, and his performance on this album is even better than the one on the first two Necrodeath albums. It’s a shame that, on this album, he sings only on the first five tracks and the other ones are sung by S.B. Reder (he makes some good hardcore shouts, but he’s not as evil as Ingo). Now, let’s talk about the most standout tracks on here: the album kicks in with Violence at the Morgue, a one-minute anxious blast-beat fest that will take your breath away; Threshold of Pain alternates some doom parts with insane death/thrash onslaughts, enriched by sick and desperate lyrics; Make Her Bleed Slowly is a nice mid-tempo which ends into another blast-beat nightmare; the title-track begins with some sinister, gloomy noises, then gives you some of the most dramatically insane riffs you’ll ever hear. We have also some hardcore-worship songs like Psycho Terror (already featured on Total Schizophrenia), the anthemic Epileptic Void and the mayhemic Sick of It All. Seriously, this album is so intense, yet so hardcore-influenced, that we could even call it grindcore. And considering that many of these songs were written in 1986/1987, we can realize that Schizo were really ahead for their time. And, talking about awesome songs, don’t forget the dreadful instrumental Behind That Curtain: it evokes a hellish atmosphere like just few other pieces of music on Earth are capable to do. Some spine-chilling guitar melodies and a gloomy, mid-paced riff pattern, and we have it. It’s fucking disturbing. The lyrics here are more focused on gore and mental insanity, and the nazi-lyrics of the first demos are luckily gone. The lyrics about insanity will become a trademark in the following Schizo albums. The production is extremely fucked up (I prefer not to think about the budget they had at that time), but it fits the album perfectly: the guitars are extremely crusty and the oppressive and muddier sound gives a perfect atmosphere to the songs. If you haven’t heard it yet, buy and listen to Main Frame Collapse: it’s a classic of italian underground album and if you love stuff like early Necrodeath, early Sepultura, Sarcofago, Mutilator, early Sodom and early Kreator, you won’t be disappointed.