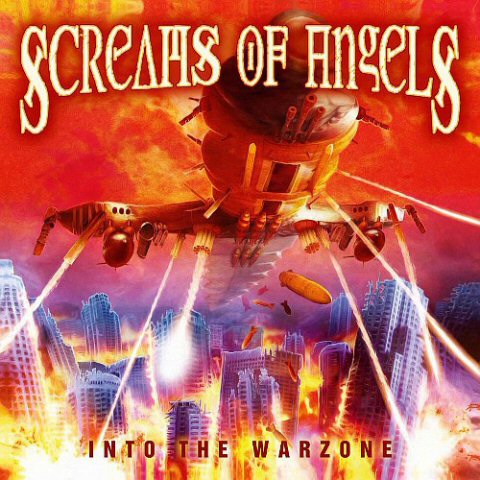 Screams Of Angels -Into The Warzone cd

The state of Washington has produced many killer metal acts through the years – and was quite the hot bed of talent during the 1980’s. From Sanctuary and Fifth Angel to Culprit and Heir Apparent (beyond the well-known Queensryche) the bands from this state developed a potent brand of traditional, power, and progressive metal and established varying degrees of popularity in their recording careers. Screams Of Angels is another such band to tip your cap to, especially if you enjoy high range power vocals, solid riffs, and a traditional rhythm section intent on delivering nothing but the best in US power metal. Jeffrey McCormack has spent time singing in 2 of these acts in the past (Heir Apparent and Fifth Angel), so it should be no surprise that he can capably glide from the bottom to the top in a multi-octave, on key manner with fierce grit and determination. Be it a straightforward anthem stance in Eyes Of The Serpent or something with more of a cultural meets militant feel like Sins Of The Fathers, he convincingly makes you a believer. Musically the guitars and keyboards form a solid layer of sound, taking influence from Jag Panzer and Metal Church as much as they do from Iron Maiden or Judas Priest – check out the slightly heavier The Modern Of Evil or Insomnia for what guitarists Rolland Fisher and Alan Nesbit along with keyboardist Op Sakiya can do with their instruments. Overall Into The Warzone is a record that probably will not gain appreciation from those into faster or more technical bands. Screams Of Angels with their more straight forward, traditional stance can gain appeal from those into those fringe acts Armored Saint, Flotsam And Jetsam, Metal Church that have a blue collar, heads down feel and play from the heart regardless of any particular in styles currently capturing the lion’s share of consumer attention. Up the irons ladies and gentlemen