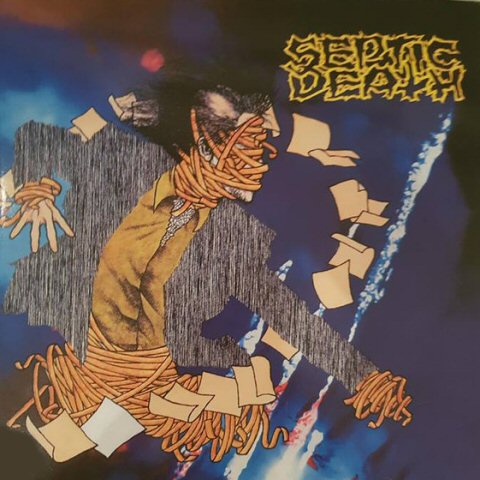 Not a lot of bands come from Boise, Idaho, however even if Septic Death were the only band to emerge from there, it should put the city on the map as birthing something great. The band was formed by late 70s/ early 80s California visual artist and skate regular Brian Pushead Schroeder, who had already made a bit of a name in the underground hardcore/ punk scene not only as a skater, but as an artist. Besides Pushead on vocals the line-up consisted of guitarist Jon Taylor and bass player Mike Matlock with Paul Birnbaum on drums. They recorded some demos and other rarities, as well as organised and played at shows in Boise, but their first vinyl appearance was on the Barricaded Suspects compilation album, released by Pomona record label/store Toxic Shock. In 1984, Septic Death released their first record on Pushead’s Pusmort label. “Need So Much Attention… Acceptance Of Whom?” was a 12″ EP, consisting of 14 minutes of blistering Hardcore Thrash. In 1986, it was re-released with extra tracks entitled “Now That I Have The Attention… What Do I Do With It?” During 84 and 85 the band were heard on various compilations. In 1985, the band moved down to San Francisco after Pushead got a job being an editor at Thrasher Magazine. After moving, the very small scene that barely existed in Idaho soon fell into obscurity. Septic Death played their last show at The Farm, San Francisco in 1986 and then broke up. However, they continued to release new music for a while longer. In 1987, they released the EP “Burial Mai So.” The EP was intended for a Japanese audience. The record contained back-up vocals from Andy Anderson of Attitude Adjustment and James Hetfield of Metallica, both on the songs “Insanity” and “Glue/Step.” Also, “Glue/Step” is a cover song, covering two of Pushead’s favourite bands: SS Decontrol and Minor Threat. In 1988, Septic Death released Kichigai. This record is often seen as their best. The 7″ EP contains songs much more progressive and experimental than a lot of their Hardcore adversaries. The dice roll paid off and the record is now seen as a Hardcore classic. The record has Andy Anderson return for the “Demon Vocals” on “Demon.” It also had Funnyara of Japanese HC group The Bones (Who turned into Grind Gods S.O.B., but without Funnyara) and Kirk Hammet of Metallica providing his trademark wah-wah guitar solos. Both musicians played on “Kichigai.” Not too long after the release of this record, Pusmort went out of business. After this, the band released several records of unreleased material, including Theme From Ozobozo but, after that, the history of the band was practically over. The legacy however lives on in the form of those influenced by them. Integrity, Extreme Noise Terror, Napalm Death and Ratos De Porao are all amongst the many to cover their songs. It’s also worth noting that Fenriz of Black Metal legends Darkthrone is also a fan. Pushead didnt do that bad afterwards either as he drew several paintings for his buddies Metallica.