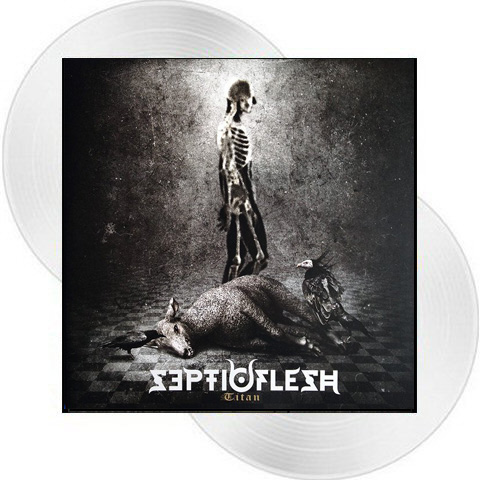 I though Great Mass was a logical evolution from Communion as it incorporated the orchestral elements better than Communion. Bigger, bolder and more brutal. Great Mass would not be easily outdone and after hearing Order of Dracul and Burn I was expecting Titan to be a misfire. While both advance tracks were ok they didn’t really impressed me. Then a third track was released called Prototype and I was floored by just how amazing this song is. And after hearing the album in its entirety. I’d say the hype is well deserved and yes, this is the best Septicflesh album to date. Here’s why…I honestly don’t even know where to start, the sheer weight of this album is breathtaking. Everything, like the transition from Communion to Great Mass is bigger and better. Let’s start with the production. Full, crisp, and clear. The drums have one of the best sounds of any extreme metal album I’ve ever heard. Vocals, choir, orchestra and electric instruments are blended perfectly. The guitars have been taken up a notch with this album and it’s a welcome return. What really sets this album above its predecessors is the maturity of the songwriting. The orchestra and newly acquired choir are incorporated with a blend and balance that are way ahead of the last two releases. Instead of individual songs the entire album seems like one giant movement. The songs themselves have way more dynamics than previous releases. Not a second is wasted on dull repetition. As for individual performances. Fotis’ drumming has always been insanely fast and technical but this album injects even more flavour and creativity. Guitars are chuggy one moment and incredibly melodic the next. Even the bass, which is usually relegated to the background with extreme metal plays a more prominent role this time around with some genuinely interesting lines. Vocals are insanely intense as usual. In hindsight my original opinions of Order of Dracul and Burn were incorrect as they fit in with the overall album perfectly. The one song I keep coming back to is Confessions of a Serial Killer. Death Metal is notorious for not taking chances but Confessions does that with an almost bluesy feel to it. Risks like this really pay off for a band like Septic. It’s not often that an album doesn’t have one bad song but Titan is a success from start to finish. To summarize, Titan is a masterpiece. With words like game changer, revolutionary, and brilliant thrown around liberally for a lot of releases only Septicflesh and a handful of others continue to push boundaries and expand the genre. Titan is an amazing album, worthy of all the praise it’s receiving from the press and the underground. Brilliantly composed, played and produced Titan is the extreme metal album of 2014.