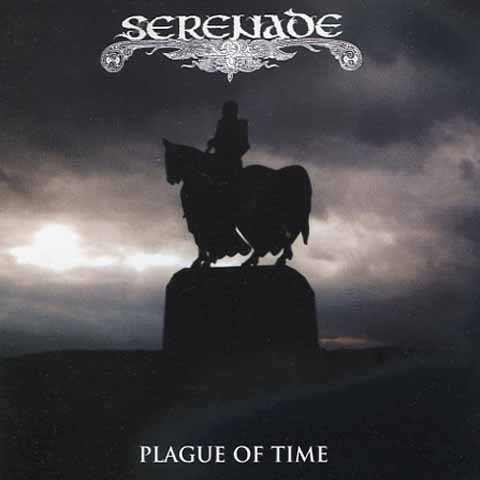 A Glasgow rooted doom metal band forged during March 1994. Previous to this the bulk of the band members had operated in Immortal Rites. As Serenade they heralded their arrival with the demo tape ‘Let Loose The Beauty Within’. The band hit trouble after the second album ‘The Chaos They Create’. The band decided to split with Deviation records and had a hard time finding a new suitable label the band also suffered major internal turbulence. Guitarist Gerry Magee broke away and bass player Stephen Mitchell relocated to Aberdeen. The band now trimmed down to a trio kept doing music and they soon headed back to the studio. Three new tracks were recorded and released with the title ‘Plague Of Time’ on their own Golden Lake Productions label. ‘Depth Of The Bleeding Angel’ kicks off with a slight eastern feel, and when the singing enters the fray, the first few bars actually reminds a little of Hawkwind. However shortly after, the singer swallows a wasp and the rest of the demo is pretty much grunt-happy. The vocals fall more into the Death Metal category of grunting with Chris Barnes springing to mind, not necessarily a bad thing. Taken as a whole, ‘Plague Of Time’, is refreshingly original. Serenade do not really follow the traditional British slant on Doom Metal, although the tracks do have a slight touch of early My Dying Bride, but in my opinion they’re more rooted in what the rest of Europe do with their darker emotions. The tracks are heavy and meander from full on power to more moody introspection, with the singer seeming to be looking out of windows or something on ‘Casting The Flesh/Say Hello To Hell’. Overall the sound could do with a little tweaking, the guitars occasionally seem a little flat, but for a self financed project this is a minor gripe.