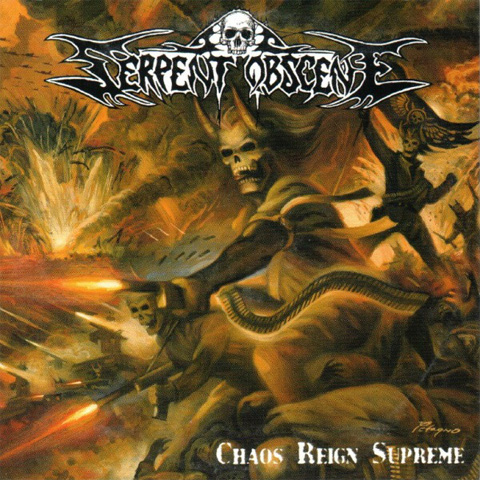 It’s strange how some albums make you feel like you’re time-travelling. I don’t mean in a ‘Back To The Future’ kind of way, rather that the production and musicality of Serpent Obscene are very much 90s Thrash/Death Metal influenced and although this is the genre which the band ascribe their music to, I would describe it as half-that, half-traditional Black Metal. Frequently I am reminded of Absu, albeit at a slower tempo. Although not strictly that original, ‘Chaos Reign Supreme’ has managed to keep me interested after a few run-throughs and is one of those albums that one can listen to a couple of times to little effect, until suddenly, after a short time, all seems to make sense and realisation dawns that… ‘Hey this album’s pretty good’ So what we have here is ten songs of raw aggression that fully justify the bands adoption of long hair, band t-shirts, leather jackets and bullet belts. Most of you readers are almost straight away going to know if it’s your sort of thing already then. This band is basically all out to make ‘brutal fucking metal’ with old school metal attitude. Then again, that’s probably got something to do with the fact that Serpent Obscene hail from Sweden and include members of Maze Of Torment and Kaamos. Production as hinted at earlier is bleak and cold, giving a whole Black Metal edge to the songs, but it’s not so ridiculous that you can barely hear each instrument and actually sounds very deliberately done and well mixed. In short, although ‘Chaos Reign Supreme’ might bore those who are unfamiliar with the genre or similar bands, but it knows what it wants to be and achieves it in fierce, uncompromising fashion.