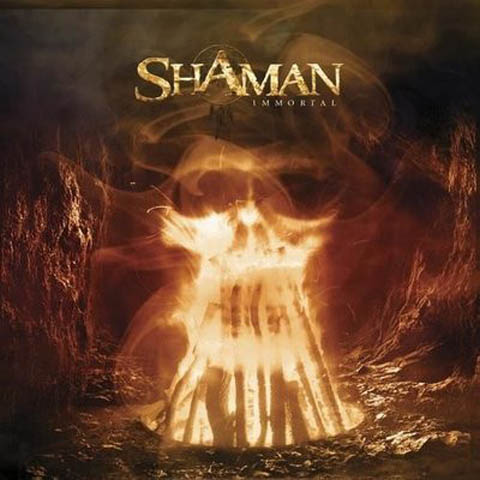 When André Matos left Angra he took Luis Mariutti and Ricardo Confessori with him and formed Shaman. With albums like Ritual, RituAlive and Reason the band really were a force to be reckon with when it came to varied prog metal and they were all well recevied by the press and fans. The one year tour for Reason however took its mark on the band and Andre Matos, Luis Mariuttie and Hugo Mairutti left the band leaving Ricardo Confessori left as the only ex-Angra and original band member. Most fans thought that this would be the end of the band but when the band returned with Immortal it was a major surprise. Replacing someone like André Matos is no sinecure, but Thiago Bianchi reveals himself as a very good vocalist and the material on here is even better than their debut album, this might even be the best Shaman album to date. Because of Matos departure we have less power metal like vocals and song structures. It resulted in an amazing piece of raw progressive power metal so if you want a decent taste from Brazil for metal like Angra this is the album for you. As a devoted follower of both Angra and Matos, it’s hard for me to admit that new vocalist Thiago Bianchi does a better job here than Matos ever could, and if Edu Falaschi ever parted ways with the aforementioned rulers of Brazilian prog/Power Metal, this guy could certainly step up to the challenge. What Shaman have done with their money on “Immortal”, is take the band’s history into consideration, and ignored all exceptions, creating an album full of blazing Power Metal anthems that span influence from the likes of Vision Divine, Symphony X and of course, Angra. Bianchi manages to glide his incredible vocal ability through fields of ethnic flavour, battling guitar duels, and storming double bass with ease, making every single track on “Immortal” stand out compared to the ream of disappointing follow ups by top name bands the same year. Opening with the two most uneventful tracks is an obscure move, but it only improves the quality of the album’s second half, making the heavenly “One Life”, the sprawling “Freedom”, and the celeritous “Strength” some of the best tracks Angra never wrote. The album Immortal is nothing but a triumph for Shaman