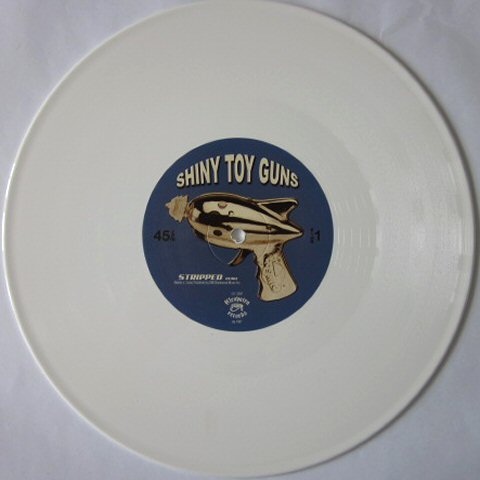 Although formed in sunny California during the early 2000s, Shiny Toy Guns’ music flaunts a sleek, ’80s-influenced combination of synth-pop and electro-clash. Founded in 2001 by bassist/keyboardist Jeremy Dawson and guitarist/vocalist Gregori Chad Petree — both natives of central Oklahoma — the band’s lineup was fully realized with the addition of vocalist Carah Faye Charnow (who was brought aboard in 2004 to replace the departing Ursula Vari) and drummer Mikey Martin. After building a local following in California, Shiny Toy Guns made its debut in early 2005 with We Are Pilots; the album was then re-recorded and reissued later that year, albeit with a slightly different track list. Extensive touring and networking on various Internet websites continued to broaden the Guns’ audience, and the group signed a contract to Universal Records in June 2006. This strictly limited 10″ single was released on Cleopatra records in 2007 and features two cover tracks; Stripped by Depeche Mode and Nothing Compares To You, written by Prince but immortalized by Sinead O’Connor.