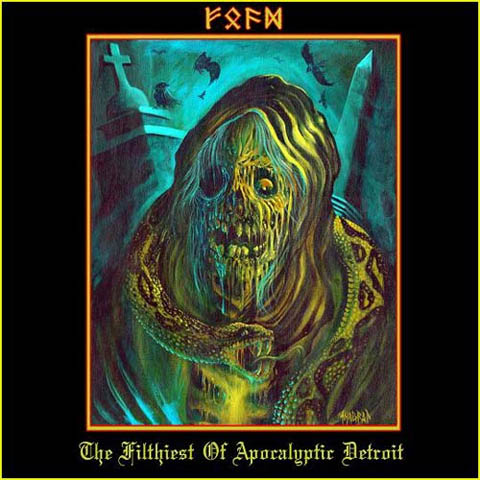 Detroit, a broken city with $ 18 trillion in debt, a city that has become the perfect setting for an episode of any post apocalyptic movie with desolate streets and bankrupt companies, entire blocks abandoned. Its a town that feels like a black stain in the land of dreams, the emblem that dreams can become a nightmare that lasts a lifetime. The sad and pathetic unwary who still swarm it will have to recycle garbage and learn to live with rats and will make cockroaches their allies, they will eat every last crumb, because in Detroit nothing is wasted and life, is a game where the simple act of going to the store to buy beer is an act of survival. This kind of enviroment always creates some interesting music. Four of acts that are a living proof are found on this split album, F.O.A.D. – The Filthiest Of Apocalyptic Detroit, Reaper, Perversion, Shitfucker and Anguish.F.O.A.D. Is a great example of how to do a compilation split of four bands, two songs each, short and simple. Reaper is a metal punk act that feels more like imitators than anything else, but its not a band thing because their songs have hooks and feels like a metal version of MC5. Perversion is a storm of evil death/thrash with a decidedly South American feel to it. The album takes heavy influence from the likes of Vulcano , Sextrash, and early Sepultura, with bits of unhinged Sarcofago and Bestial Mockery styling floating to the surface. Shitfucker has been on split releases with the likes of Abigail and Midnight and combines some sort of black metal with crust punk. Last out on the album is Anguish that pays thrashin destructive metal punk and maybe the band that represents the town most as its an endless barrage of blistering fast crust, accompanied by the bassist’s cold, tormented growl and fast, punchy ripping of the 4-string, the guitarists endless, motor-powered 6-string torture, and the drummer’s tight, constant, and deadly skin bashing, to it’s wonderful lyrics, telling of their hometown, the frigid, rusted wasteland we all know as Detroit. From the very second this song starts, it will destroy, and nothing will be left of unworthy listeners. So those who enjoy the filthier side of life and dont mind death, thrash, crust and punk mixed into one then this album shall fuck you up in ways you only could have dreamed of.