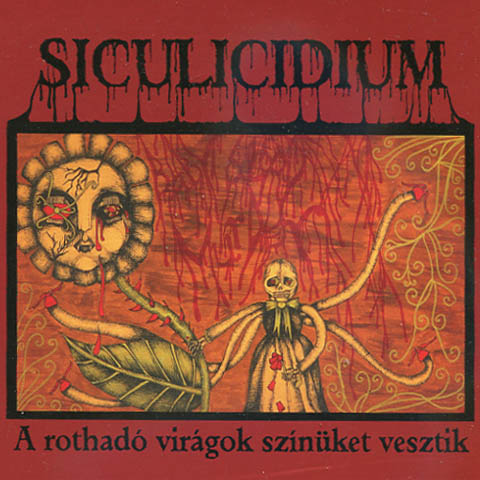 When I first listened to the Transylvanian black metal act Siculicidium a couple of years ago I subsequently loved it. They exhibited a striking blend of influences from Tormentor to Inquisition and Darkthrone among others. A Rothado Viragok Szinuket Vesztik is the first release after their only full length album and its retains the same basic style and principles of the album, except this time it appears to have been stripped right to the bone and sandblasted with a huge amount of wretched dirt. The underworld melodies have been for the most part been replaced by a brash and obnoxious punk like influence which for the most part seems to transfer across rather well. It’s a short enough affair, there’s only three proper songs which are new, then you’ve got two interludes and then two tracks which are rehearsals presumably left over from the recording of their debut album. Zuhanas kicks things off with a horror driven dirge and you can immediately hear the Tormentor influences in the band’s sound here, most notably in Bela Lugosis grim, rasped vocals. Supported with subtle synth work and Krul’s slightly muffled albeit impressive drumming it is the only track that really carries forward that grisly, evil sound from before. Holnap majd felgyujtom az erdot is where the crusty black n roll influences really seep through, Hellhammer-esque in all their raw garage like glory. Ultimately though this song doesn’t really do much for me, its repetition doesn’t really work and the song in general just comes across as a tad silly. Then came Varnak a varjak and even though it wasn’t even two minutes long I thought it was pretty fucking awesome, except it sounded a touch familiar. Struggling to put my finger on it and racking my brain for ages it then dawned on me, that same rhythm and arrangement was used on Halvanyan az ido Ellen which is a track off the last release and also makes a cameo here as well in rough rehearsal form. Here it is moulded into an atmospheric and melancholic interlude that provokes an eerie sense of unease and trepidation and a direction I wouldn’t mind the band exploring further. It works very well. Okortej reverts back to the raucous and raw black metal, brisk in pace with its primitive tremolo riffing and those obnoxious vocal patterns and ugly attitude, it almost sounds to these ears like a twisted marriage between Darkthrone and Absurd. The vocals could definitely do with being filled out a bit though, it sounds as if Bela Lugosi has been recorded while singing halfway down a hallway. The next two tracks are rehearsals off the last album and there’s not much to say about them really other than Halvanyan having the same melody as Varnak except transcribed in metal form this time around and A Sajnalat utolso lehelete being an extremely unevolved version of that previously seen on the last album. For what it is, A rothado viragok szinuket vesztik is again another decent release by this Romanian horde. It’s a lot different in contrast to the last album though, bearing an altogether more repulsive and odious facade than previously seen in its punkish delivery. At the end of the day though there are only four completely new tracks here, the rest appears to be no more than a collection of odds and sods that have been tacked on for good measure so I would advise newcomers to start with the debut first, and then opinions deciding, they could move on to this without too much hesitation.