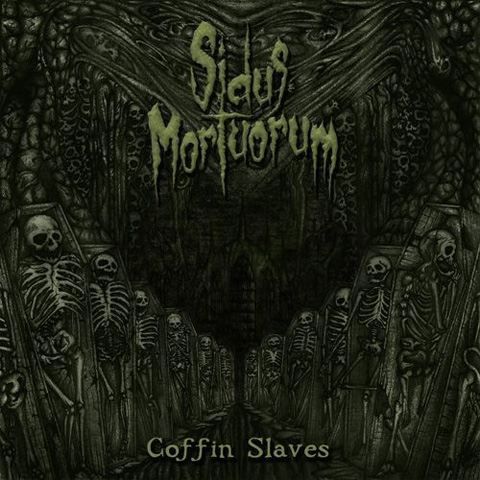 Coffin Slaves is the second album from the Ukranian death metal hordes Sidus Mortuorum. The band was formed in Rivne in 2008 and two years later they released their debut album Endless Funeral. Once the first album was out the band started working on the next and they re-entered the studio in autumn of 2011. The sophomore album Coffin Slaves was released in 2012 and if youre into the deepest depths of the good and old-school death metal style of the 90s, when bands such as Obituary, Cannibal Corpse, Death, Morgoth or Asphyx reigned the scene, then the music delivered by the young Ukrainian quintet is definitely for you. You will get 8 uncompromising death metal songs full of great mid-paced riffs and melodies from the past. Basically you won’t discover any novelties during their circa 40 minutes long album, but as you might noticed there wasn’t even a plan to commit something new or different at all. Coffin Slaves is 100% dedicated to the traditional and classic forms of Death Metal. So don’t expect any modern shit, like sweeps, hyper fast guitar techniques or gravity blasts. This is pure Death Metal. Moreover, the album’s sound is pretty obscure and close to those used in the end of the 90s. Another interesting thing that has to be mentioned here is their vocalists manner, which is very, and I mean really very close to John Tardy’s style of vocalizing. So if you are keen on the music of Obituary and Six Feet Under you can very well invest into this record