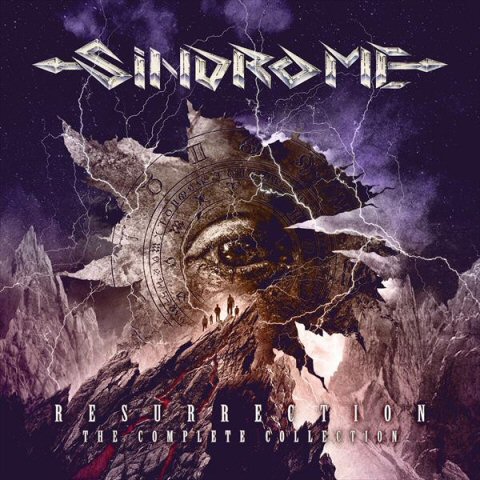 Deluxe digipak with slipcase and a 36 page booklet

Sindrome is a case study in misfortune. Heralded as Chicago’s best thrash band ever, the band were wildly popular, and with good reason, as they were highly skilled musicians who played tight, aggressive thrash. Apparently they rejected smaller label offers in hopes of securing a major label deal, a deal that never came. Thus, they never progressed beyond the demo stage. Two demos were released: Into The Halls Of Extermination in 1987 and Vault Of Inner Conscience in 1991. Both demos are available on this album. A shame that this band never realized its potential.

Vault Of Inner Conscience 1991
Vault Of Inner Conscience was the bands second and last demo and it features Troy Dixler (from Devastation) on vocals, Shaun Glass (from Broken Hope) on bass, Tony Ochoa (from Jungle Rot) on drums, Mick Vega (from Hammeron, MadDog) on guitar and Ken Savich (from Laaz Rockit) on gutar. This demo contains five tracks that together build up a massive concept story. And all its done in a mighty thrashing glory, a perfect middle ground between And Justice for All, late-80s Slayer, and Practice What You Preach. The album has an interesting apocalyptic theme. The concept is about a man who starts seeing visions of the apocalypse. He wants to dismiss them as dreams, but they come repeatedly, and eventually he has to face them. In other words, the lyrics are very much thrash metal. Sindrome is a band not afraid to wear their influences on their sleeve. Coroner, Forbidden, Slayer, and Testament all ring through here. Specifically, vocalist Troy Dixler sounds sort of like Chuck Billy, and the solos are total Slayer (which is a good or bad thing depending on how much you like Slayer). Even though that could be seen as a point against this album, I like it. The songwriting is very original, and even though you know their influences, it doesnt sound like OK, here comes the Coroner part. Dixler has a unique style. He doesnt really sing, he talks. Its as if hes having a conversation with you over the music. The thing is, being a thrash vocalist, it sounds like hes yelling at you. There is melody in his vocals, sure, but its only the normal tone shifts that take place in conversation. Hes a perfect fit for the band, I have to say, and it works wonderfully on this demo. Youll probably shout along with him on the choruses, especially the opener Descending Into Madness. Surprisingly for a thrash metal demo, its not the riffs that make it good. The riffs dont really stand out as much as the songs do. These riffs arent all that great, but they create a sense of chaotic energy that somehow makes up for the lack of catchiness. I couldnt hum you a single riff from this album, and yet the pure energy surge that the music is makes up for that. The album isnt super-technical, but Sindrome was a band that took pride in the fact that they their music was more than just reused Hellhammer riffs. At the same time, the album isnt melodic enough to truly be catchy outside of the vocals. I know, Im complaining about a thrash album not being melodic. I, personally, like my thrash catchy with lots of Maiden influence, but thats just my taste. This is a well-done thrash demo, and my advice is to get it if you can find it, it will catch you.

Into The Halls Of Extermination 1987
Into The Halls Of Extermination was the bands first demo and it features Troy Dixler (from Devastation) on vocals, Shaun Glass (from Broken Hope) on bass, Tony Ochoa (from Jungle Rot) on drums, Chris Mittleburn (from Master, Death Strike) on guitar and Erv Brautigam (from Devastation) on gutar. This first demo contains five tracks of relentless, brutal thrash metal that, thanks to the deep vocals, can be labelled also as death/thrash metal. By the way, the riffage, the drumming are thrash metal based and even if the vocals are quite deep for the period, its difficult to call this exactly death/thrash metal. Anyway, the violence is always high and the influences come from bands like Dark Angel and Slayer. The palm muting riffs are pure, fast and essential while the drumming is a bit hidden during the singing parts because the production is not the best. The speed is almost always high and the title track or the following Rapture in Blood manage to be also truly dark and evil thanks to several distortions and frightening vocals. The guitars solos are simply on tremolo picking, so fast as hell and massive in their brutality. The snare drum sound is the part you can hear best because the other parts and toms on the drum kit are too low in volumes. Precognition is dark and slow by the beginning to restart on speed. The vocals are really vicious and fast here and the following Cathedral of Ice features a better bass drum work and a return of the dark atmospheres. The last Aortic Expulsion is a return to speed and its perfect to close this little but worthy demo. The guitars lines are always quite various even if they are not astounding and everything is good. This is not a masterpiece but a sincere piece of thrash metal and my advice is to get it if you can find it, it will catch you.