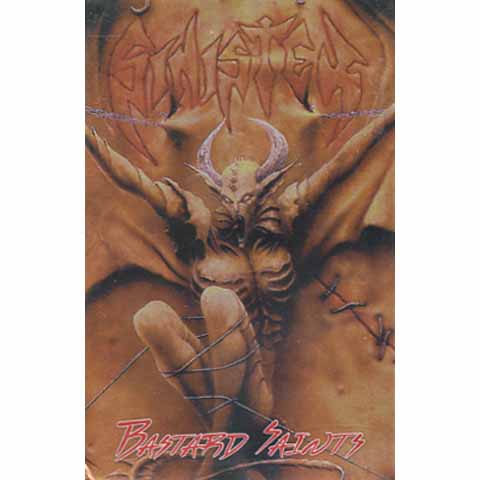 Sinister is perhaps one of the most underrated death metal acts ever to emerge on the 90s metal scene. In 1988 they began their quest for metal annihilation, recording several demos and EPs which slowly paved the way for future success. The “Bastard Saints” EP was released in 1996, between the bands third and fourth album. Its a hook-filled slab of raging death metal with meaty riffs mixed with the occasional off-time guitar run mixed with quality vocal melodies (if you can call them that) and an air-tight production job show the Sinister boys doing what Swedes often did best. “Bastard Saints” is one of the better offerings they belched out and a worthy purchase for all of those who like their death metal smooth and aggressive. This avoids the problems of production many death metal bands have as the sound encompasses all things clearly without being too clear, and the boys in the band grind away with a sense of beat that is unique in a scene dominated by cold levels of brutality. Yes it’s brutal, yes it’s often technical and yes it’s death metal…but it’s also a good time in many ways that most bands are not. The opening “Bastard Saints” is the catchiest death metal tune I’ve heard in quite some time. “Rebels Dome” is also quite the kick fest as Sinister grind and plod away with a deep pocket of intensity throughout. All of the songs retain a high level of melodic brutality that keeps the melodies on the right side of rock and roll. This is not the American splatter-style nor the Scandanavian leanings towards Maiden-esque melodicism – this is a style that Sinister carved taking the best technical death and grafting it to the simple qualities that made old-school heavy metal so enjoyable.