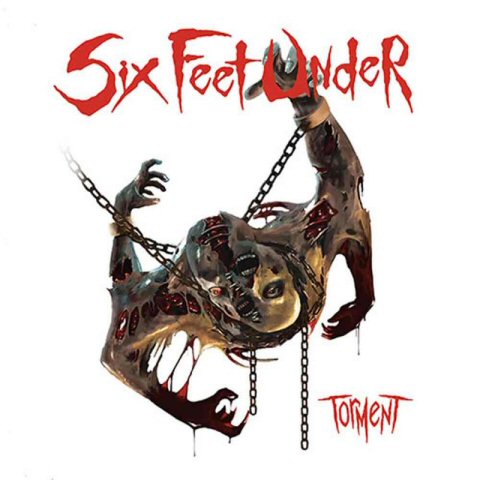 There’s plenty of classic Six Feet Under groove to be had on the bands twelfth studio album, “Torment”, but fans will note a much more aggressive approach, and even more modern blast beats throughout. This is a cantankerous Six Feet Under with absolutely nothing to prove. This is Six Feet Under at its most deadly. “Torment” was brought to life by Chris Barnes with bassist/guitarist Jeff Hughell shouldering the load of writing the music, along with heralded drummer Marco Pitruzzella. The combination of Barnes multi-decade death metal experience and the speed and precision of Hughell and Pitruzzella’s relative youth go a long way to cementing this as a solid foundation for high-level death metal. This is immediately apparent in the first track “Sacrificial Kill” and expanded further right away in the second track “Exploratory Homicide”. Both Hughell and Pitruzzella are allowed to play their style of metal with a unique Six Feet Under flair. That’s what makes “Torment” a unique and welcome addition to the band’s stories catalogue. Barnes states about “Torment”: “I’ve been lucky to have a lot of standout albums in my career. That’s only because I’ve had a great many talented writing partners and musicians to collaborate with. Our 2017 album, ‘Torment’, to me, is one of those albums. Jeff Hughell has provided the flammable material for me to write some explosive lyrics and vocal parts to. “I know people always say, ‘This is my best album ever,’ and I won’t say that, because everyone has their own favorites, but I do enjoy creating new music, and I feel as though with this one we expressed concisely and to the fullest the duality of our music. Torment’ has been a great album to work on and help create, we hope all of our fans appreciate it.”

Track list:
1. Sacrificial Kill
2. Exploratory Homicide
3. The Separation Of Flesh From Bone
4. Schizomaniac
5. Skeleton
6. Knife Through The Skull
7. Slaughtered As They Slept
8. In The Process Of Decomposing
9. Funeral Mask
10. Obsidian
11. Bloody Underwear
12. Roots Of Evil