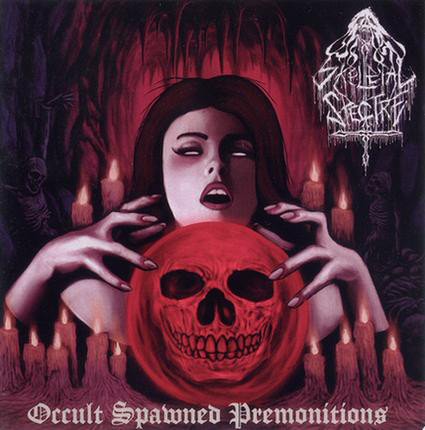 European version with one bonus track

Skeletal Spectre’s 2009 debut Tomb Coven was a bit of a treat, a cult horror infested romp through the annals of traditional Swedish death metal and solid, stumbling doom passages. A spooky, sad space between Entombed and early Tiamat, traced back through the legacy of Black Sabbath. For its follow-up, the duo decided to enlist and expand to incorporate a vocalist: Vanessa Nocera. You’ll likely recognize her as the wife of Billy Nocera, or from her other acts in the extended Razorback family: Scaremaker and Wooden Stake. Her major contribution here is in a stylistic switch-up between the gruff, guttural vocals one would expect to an acidic, unnerving clean style that conjures a psychedelic, ritual doom aesthetic not unlike a Jex Thoth or Blood Ceremony, if slightly less melodic. Needless to say, it works well within the context of Occult Spawned Premonitions, and helps lend the album an atmosphere redolent of the good old Hammer Horror flicks or other cult films, while not abandoning the riff-heavy death of the debut. Tracks like “Scalped” and “Untimely Tomb” lumber along like undead goliaths, smashing but simple walls of chords that span the slower and mid-paces of the genre, summoning comparisons to peers like Hooded Menace or Decrepitaph. Others, like the catchy “Raw Head And Blood Bones” or the title track, bring the doom rock to the fore with bold and basal guitars that support Vanessa’s broader snarling and growling. Another strength of the band, which was present on the debut, is the subtle use of sombre melodies that range off against the crush of the central rhythms. Most of the cuts are wrapped up in about 4-5 minutes, with only one exception in the droning, oppressive finale “Domain of the Fleshless One”, which manages its bulk with a steady floe of funeral rhythms and a tortured, torn throat. I didn’t find the sophomore to be quite so catchy as its predecessor, few songs so memorable as “Eerie Bones” or “Tomb Coven” itself, but I think it will still have its appeal among the other acts on the Razorback roster. Not necessarily something anyone will take seriously, but then that’s the M.O. of so many of Skeletal Spectre’s contemporaries: provide a fun filled, effective outlet to celebrate the old school extremity of late 80s and early 90s death, thrash, doom or grind, and dress it in a package of nostalgia for classic horror camp. Nocera’s cleaner vocals can grate on the ears in places, and I could have lived with a more powerful mix of drums, which seem to be over burdened by the weight of the guitars, but otherwise it should prove a good time for fans of Hooded Menace, Acid Witch, Wooden Stake, Father Befouled and the entire crew.