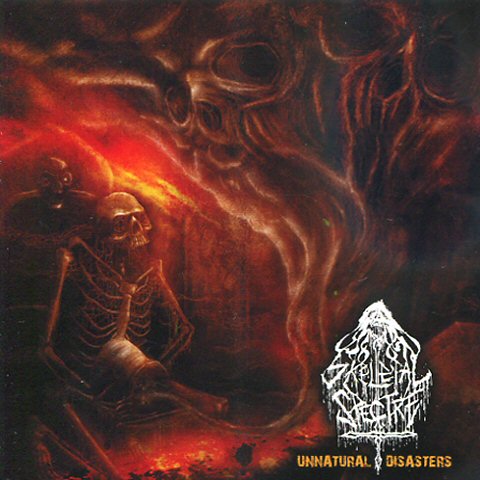 Skeletal Spectre was a female fronted, ghastly Doom/Death Metal hybrid band influenced by spirits of the undead and graveyard sacrifices at midnight. For their fourth album, Unnatural Disasters, the band made a major change as Vanessa Nocera cant be find behind the microphone anymore. Instead we find Rogga Johansson (Paganizer, Ribspreader etc). This is still a heavy as hell album but with Rogga’s growling vocals instead of Vanessa’s. What separates this Swedish/US collaboration from more directly mirroring its more dreary forefathers is the fact that, in part, it’s another nod to the Sunlight studio guitar tone and D-beat driven, rock-fired riff grooves characteristic of groups like Entombed and Dismember at their prime. The lyrics are pure cult/Gothic horror, which is perhaps no deviation from their earlier album. This is not the sort of album you’d seek out if interested in an original approach to the nostalgia of the death and doom mediums, but focused more on putting a smile on the faces of classic horror and death metal buffs, which it does.

Track list:
1. Dormant In The Deep
2. Are You Nightbreed
3. Hunt Them Down
4. Welcome To My Wasteland
5. That Wich Crawled Onto These Shores
6. Nightblade
7. Unnatural Disasters
8. Draped In Blood And Guts