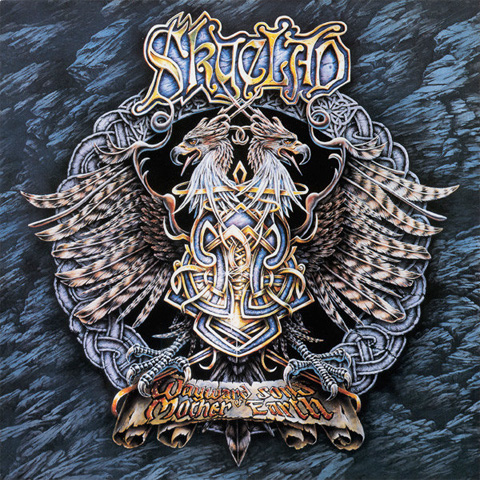 Based in Newcastle, England, the folk thrash metal band Skyclad was founded in 1990 by vocalist Martin Walkyier, who left his previous band, Sabbat, after an argument with guitarist Andy Sneap. Walkyier added two former members of Pariah — guitarist Steve Ramsey and bassist Graeme English — as well as second guitarist Dave Pugh and drummer Keith Baxter. The band signed to the German Noise International label and recorded Wayward Sons of Mother Earth for a 1991 release. The band have always been regarded as one of the forefathers of the folk metal genre and when their debut album was released in 1991 it was a groundbreaking album. Despite the album sleeve’s picture of them wielding swords and clad in medieval garb, the band starts off tentatively, leading the way with the thrash-heavy ‘Sky Beneath My Feet’ and ‘Trance Dance’ before plunging into the album’s folkiest moment, ‘The Widdershin’s Jig’ with it’s violin-led arrangement. The second half of the album features more great progressive thrash metal in ‘Cradle Will Fall’ and ‘Moongleam And Meadowsweet’. With this album Skyclad firmly declared their mission and though a groundbreaking and great album it was only a sign of things to come