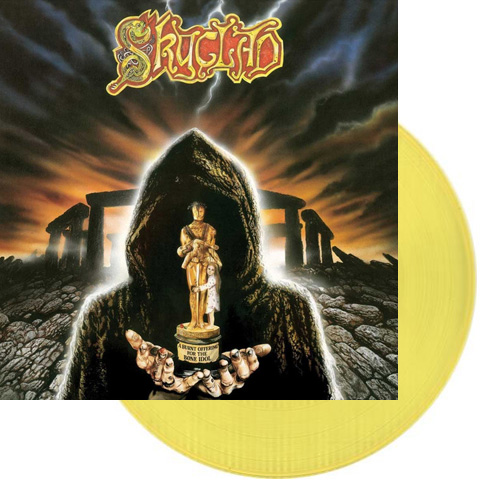 Skyclad –A Burnt Offering For The Bone Idol lp [yellow]

Their 1991 album The Wayward Sons Of Mother Earth had been an earth shattering album and breaking new ground with bringing folk music into heavy metal. The 1992 titled A Burnt Offering For The Bone Idol would bring Skyclad even closer to their goal of melding thrash and classic metal influences with folk music. Like the final piece to a puzzle, the addition of full-time fiddle player Fritha Jenkins boosts the band’s courage, and the album’s excellent first single Spinning Jenny epitomizes their direction and newfound sense of purpose. Songs like A Broken Promised Land, Alone in Death’s Shadow and Karmageddon still thrash convincingly, but also benefit from melodic keyboard lines and better singing from vocalist Martin Walkyier. This was also the first album that signaled the band’s first foray into socio-political issues. Granted, Sabbat’s general dogma was that Paganism’s purity always defeats Catholicism’s ignorance of carnal and earthly pleasures, but here, Walkyier explodes of anger. He clumsily talks about pedophilia in the clergy without even using this term on Men of Straw, declaring that They are not men but beasts indeed, so take this beast and hang it, coming to order people to Just line them all against the wall and let me pull the trigger. Fortunately, he talks more cleverly of pacifism on A Broken Promised Land, where he references the paradoxical upturn on Russia and the high-crime Moss district of Manchester (In the troubled streets of Moscow and in tenements in Moss Side / There are people using silver tongues to turn dissenting worms / How can the dissatisfaction of some left or right wing faction / Hope to justify the bombs that burst, the innocents that burn). On Spinning Jenny he impersonates a man justifying his sexuality that easily turns into perversity (“God knows I was an honest man, the same as any other / Who loved his wife, worked all his life to keep his family / Until the beast that never sleeps beneath my silken covers / Reared its head and bit its thumb at my morality). Skyclad, exactly as Sabbat, were a much more powerful lyrical/idealistic force than a consistent musical act. Skyclad’s second album may be one of their most consistent ever, being capable of rivaling Sabbat. While purists may find this album too adventurous, more open-minded listeners will thoroughly enjoy it’s original voice and sense of daring.