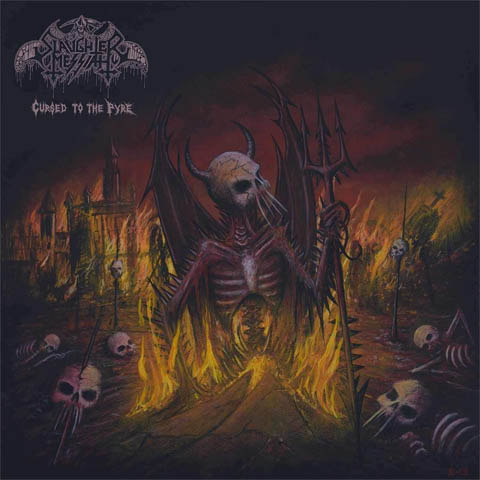 “It becomes clear that there has been a huge evolution when you compare our old songs to this album” … a statement that rings true – and loudly so – as early as, at the latest, 30 seconds into Cursed To The Pyre, the debut full-length of deadly thrashers Slaughter Messiah. Having channelled their primal instincts with simple yet effective fare on two demos and three EPs in less than ten years, the band sounds peculiarly sophisticated on their first album while maintaining every bit of their trademark aggression and – maybe distinctly?. It is fair to say that the four-piece easily manages to set itself apart from the largely faceless pack that flooded the scene in recent day by tacking familiar archaisms to stunningly complex compositions in order to create something that sounds as extreme as it is original. The first pressing of this album were sold out quickly so it looks like the future of this Belgian thrash act looks bright

Track list:
1. From The Tomb Into The Void
2. Mutilated By Depths
3. Pouring Chaos
4. Hideous Affliction
5. Descending To Black Fire
6. Pyre
7. The Hammer Of Ghouls
8. Fog Of The Malevolent Sore