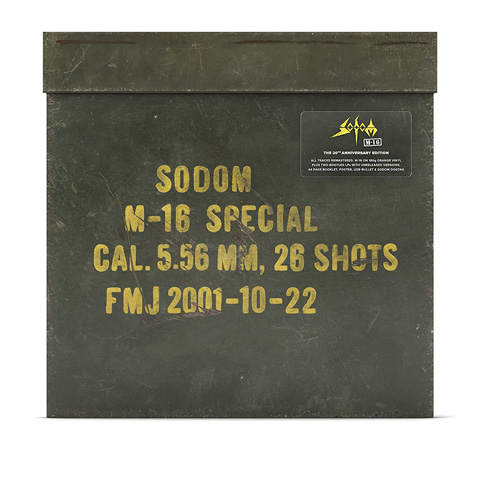 The tenth full-length from German thrash mainstays in Sodom, “M-16,” is another strong, intense effort that shows the band has really come to terms in this later stage of their career to return to a full-on thrash with one of the better releases in their catalogue. Opening with the classic ‘Among the Weirdcong,’ which starts with pounding militaristic drumming and intense thrashing beats with explosive technically-stylish riffing along a groovy mid-tempo pace and commanding vocals keeps effort powerful but restrained pace that lets loose with fiery solo section atop the full-scale thrash blasting and violent old-school riffs, it leaves little doubt about the band’s continued quest to stay as an upper-tier thrash band with a rocking intro track. Not only does this seem like a cohesive concept album lyrically and sonically through the common element of war in the lyrics but also the way its produced which offers a streamlined and recognizable sound throughout despite also having a ton of strong songs if looked at individually, the fact that the return to full-scale thrash has allowed the band the option of being able to wrap together songs with varying tempos, a slaughtering series of riffs to display actual technical talent throughout which is quite an impressive feat. Maybe it’s not the destructive tour-de-force of the bands’ best years or contains the de-facto, immortal classic that might make others more of a priority but this is still an impressive enough album on the whole to appeal to the long-term fans as well fans of classic thrash in general.