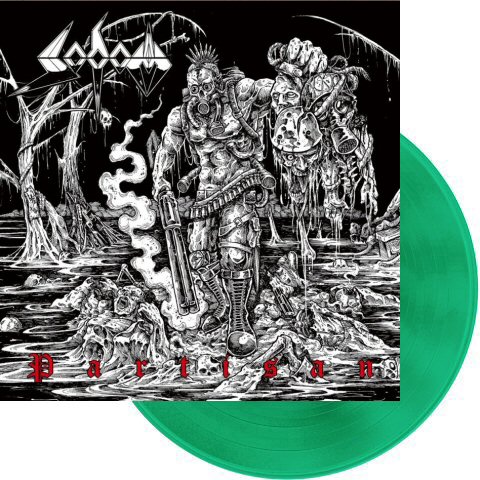 Earlier in 2018 German thrash metal veterans Sodom caught many by surprise when bass guitarist and frontman Thomas “Angelripper” Such officially announced that the band was parting ways with drummer Markus “Makka” Freiwald and lead guitarist of almost twenty years Bernd “Bernemann” Kost. The exodus was rather sketchy with the now ex-members citing how they were fired over Whatsapp without as much as an ear lent to their newly written material. This change affected touring schedules too as the band had pulled out of February 2018’s Full Metal Mountain festival because of short notice for the new line-up. What we do know is that the now 4-piece band introduces Frank “Blackfire” Gosdzik and Yorck Segatz on guitars and Stefan “Husky” Huskens replacing Makka behind the drumkit. The artwork is carrying the signature style the group has followed for years, however has a monochromatic approach with only the title in red. This is not a full-length studio album and comprises a total of three tracks only, Title song ‘Partisan’, ‘Conflagration’ and a live recording of ‘Tired And Red’ originally from 1989’s Agent Orange album, played at this year’s Rock Hard Festival. Regarding the other two tracks it has the essence of classic Teutonic thrash metal the band has been recognized for. I like that it is well produced and not over-produced with excessive compression as a result the guitars sound clean yet retain an organic tone in the mix. Though it is an EP that celebrates a new beginning of this legendary band and an exhibition to what they will sound like going forward, with approximately seventeen minutes of playtime. ‘Partisan’ celebrates a new beginning for this legendary band and an exhibition to what they will sound like going forward. However its lack of runtime and tracks that feel like an extension of the previous record may wear it out faster than expected.