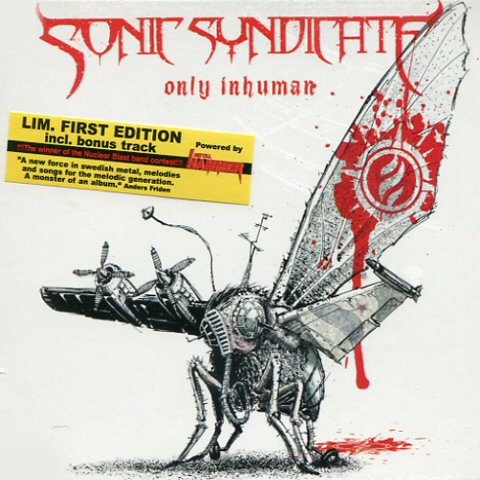 Sonic Syndicate have returned with their second album ‘Only Inhuman’ and this time around, they have landed themselves a contract with Nuclear Blast. The success of their first album won over the staff at Nuclear Blast and they consequently came first in the Bandcontest held by their new label in 2005. With three brothers, a female bassist, a drummer and an additional vocalist, what is there not to like about Sonic Syndicate? From the opening bars of the first song ‘Aftermath’, it doesn’t take much to figure out where the band’s influences come from. Acts such as In Flames, Soilwork and Darkane are clearly heard within the band’s approach to melodic death metal, with huge sounding keyboards, the dual vocal approach and the catchy as hell choruses all the tell tale signs needed to come to that very conclusion. With a slicker production and a greater keyboard presence, ‘Only Inhuman’ is quite a change of sound for Sonic Syndicate over their previous effort, and clearly catering for a certain demographic. But having said that, ‘Only Inhuman’ doesn’t really give anything that the likes of In Flames, Soilwork and Darkane haven’t delivered in the last five years. It’s a flawless and solid album and should appeal to fans of the above bands but at the same time it also feels like an ultimately unnecessary copycat. If you havent heard In Flames, Darkane or Soilwork then this might be a very fresh adrenaline album