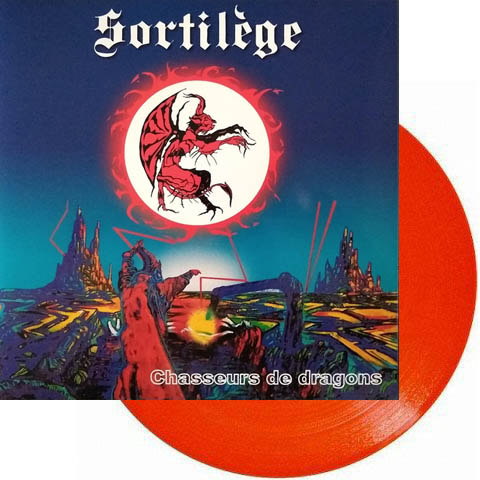 When it comes to French heavy metal then the country had some sort of craze for that kind of music in the 80s when bands like Trust, Warning, Satan Jokers all were popular in their home country. This was the golden years when it comes to French heavy metal because the genre was in decline before it turned into the 90s. While the bigger bands from Usa and England managed to continue and keep their audience the French scene really never recovered. One French band that made an impact on the international scene was Sortilege who released some classic albums during the first years of the 80s but were gone already after a few years. Sortilege was originally known as Blood Wave, this Parisian Heavy Metal outfit adopted the name Sortilege (‘Sorcery’) in October 1981 and duly found a ready audience in their homeland as they toured as support to Samson and Def Leppard in 1983. The group debuted with their self-titled affair on the small Dutch Rave On label. This rare mini album features five killer songs and are considered to be an underground masterpiece. If you are fan of Death and Chuck Schuldiner you should be aware of the opening riffs of the Amazone as it was used by Chuck for his hit Evil Dead. Sortilege debuted in Britain with the track Cyclope De L’etang on the Ebony Records compilation album Metal Warriors, but signed to German label Steamhammer for a string of albums, Metamorphose (1984) and Heroes Tears (1985). In 1984 and 1985 Sortilege was often cited together with bands like Heir Apparent or Crimson Glory, even Queensryche, in that their music built on the classic NWOBHM style that all those young musicians no doubt were huge fans of, but expanded on the sound in a similar direction – still more melodic (if possible), with a strong reliance on strong, well-executed falsetto or falsetto-ish singing where the singer actually hit his notes, well-crafted classical-influenced guitar solos, and fantasy-related lyrical themes. Sound familiar? In fact, although the concept did not yet exist, you could call Sortilege embryonic power metal. Christian Augustin, the singer, and Stephane Dumont, the lead guitarist, are top-notch, and it is a shame that none of them has gone onto a great career and its a shame that the band fell into oblivion after just four years on the scene. The memory of Sortilege however has never faded and this album is a proof of that. A live album recorded at Parc Winston Churchill in Deuil-La-Barre (a northern suburb of Paris), France on the 26th of October 1985, released 35 years after the bands break up.