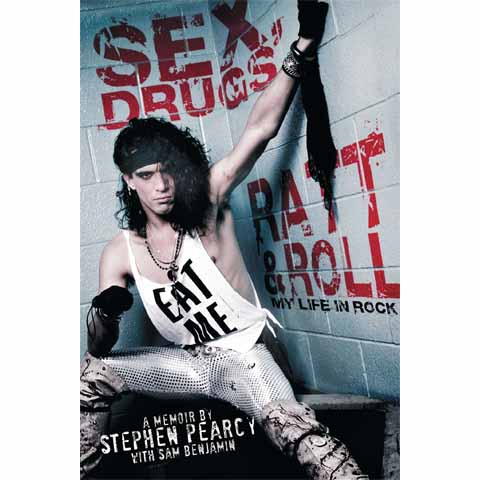 The jaw-dropping tell-all from the lead singer of 1980s supergroup Ratt—and the dirty details of the riotous era when big-haired bands ruled the world. Women. Spandex. Drugs. Hair spray. . . . Welcome to heavy metal rock ’n’ roll, circa 1980, when all you needed was the right look, burning ambition, and a chance. Cranking out metal just as metal got hot, Ratt was the perfect band at the perfect time, and their hit single Round and Round became a top-selling anthem. The bigger Ratt got, the more excessive lead singer Stephen Pearcy and his pussy pirates became. There was nothing these guys wouldn’t snort, drink, bed, or break. But as Ratt scrambled up a wall of fame and wealth, so they experienced a gut-wrenching free fall. Pearcy’s stunningly honest rock ’n’ roll confessional, by turns incredible, hilarious, and lyrical, is more than a story of survival—it’s a search for the things that matter most. Stephen Pearcy, founder, lead singer and songwriter of the popular rock band Ratt, led his band to critical praise and multi-platinum success. Formed in Los Angeles in 1982 from the remains of his band Mickey Ratt, Ratt was known for their flamboyant appearance and rebellious attitude. Pearcy currently lives in Los Angeles.

In 2009, I packed myself off to rehab in Pasadena, California, in an attempt to wean myself from that nagging booze/pills/grass/heroin habit I’d picked up over the last several decades. There was an initial period of hell, better known as withdrawal, followed by a long stretch of a much more annoying kind of torture: therapy. I was assigned a decent, flabby therapist named Dr. Harold Roberts, who had the nerve to imply that I might have a few other addictions to my name, too.
What I’d like to ask you, Stephen, is, have you ever considered yourself a sex addict? How many partners might you have had? He said it casually, but I could see his interest was growing.
You know that guy John Paul? I said. Lives in Italy?
The Pope? Dr. Roberts asked.
More than him.
Do you have anything else that you want to tell me, Stephen? Dr. Roberts said. Anything that you’d like to get off your chest?
Where do I start?