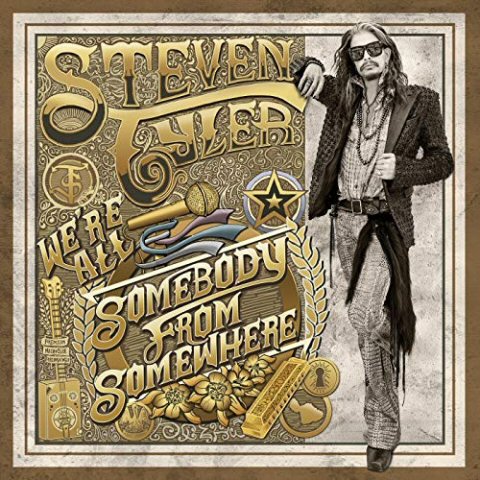 Steven Tyler ‎–We’re All Somebody From Somewhere cd

What can be said about Aerosmith frontman Steven Tyler that hasn’t already been said? The iconic singer has had his share of critics and worshippers over his nearly 50-year career, the best of which place him among the greatest singers in the history of rock music, and the worst label him an overrated, attention-seeking sell-out. So which is it? His first solo album, “We’re All Somebody From Somewhere,” tries to answer that question, and with mixed results. There are moments of brilliance on this album that remind us that he’s not only a great singer, but a talented songwriter. The opening track, “My Own Worst Enemy” is a prime example that the 68-year old Tyler can still create a song that strikes the universal chord of heartbreak, even if it’s your fault. As the raspy-throated singer croons, “I can blame forever even though I didn’t get it/I can blame love even though I often left it/I can blame goodbye even though I said it/and maybe that’s just me/that’s why you had to leave.” The song later explodes into a musical climax that blends Aerosmith classics like Dream On and Darkness with something else entirely, and it works. While “Enemy” is one of his best songs, there is some filler. “Red White and You” is the worst offender, as Tyler desperately tries to sound “country” by throwing in every cliché imaginable, including name checking Tom Petty, big machines, sweet potato pie, and “free falling into your yum yum” (I’m not making that last one up—the same guy who brought us the spitfire lyrical genius that is Walk This Way actually says “yum yum”). The rest of the songs fall somewhere in between. It’s a ballad-heavy album, which is no surprise given Tyler’s hand in crafting masterpieces like Dream On. It Ain’t Easy and What Am I Doing Right remind us of the emotionally powerful combination of Tyler’s voice and lyrics. You can actually feel his soul reaching out for answers in these songs, which was missing from many of his recent efforts. Nominally a country album, We’re All Somebody from Somewhere doesn’t belong to any country: laden with power ballads and pulsating polished rockers, it’s commercial music for nonexistent formats. By the time he closes the record with superfluous renditions of Piece Of My Heart and Janie’s Got A Gun — certainly leaner than the Pump original, yet still overblown — it’s clear that nobody involved with We’re All Somebody from Somewhere had a conception for the music: they just wanted to cut a record that would be everything for everyone in the hopes it’d appeal to somebody from somewhere. The album is good, but it’s not going to settle any debates about Tyler’s place in history, and I can accept that. After all, it’s Steven Tyler. I think he’s earned the right to be whatever he wants.