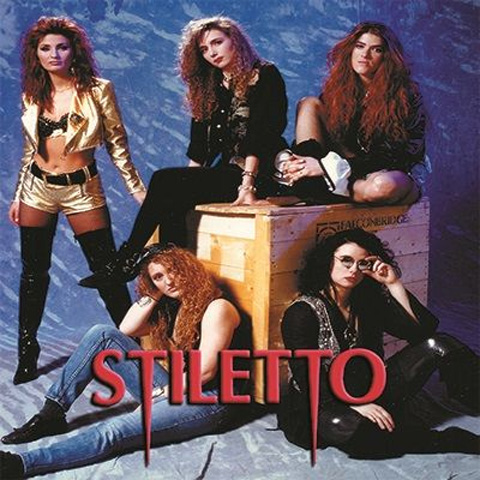 Don’t let the name fool you. This five-piece, all female, musical powerhouse is far more likely to have trampled your heart in a pair of Doc Martens than in any other type of footwear that their name may suggest. In the pre-Lilith Fair era, and in a musical genre that didn’t often view women as serious musicians, Stiletto shattered stereotypes and redefined what it meant to be a woman of rock. Hailing from Toronto, Ontario, Canada, Stiletto came together in September of 1989. Founding member, Carole Couture (lead vocals), originally from Montreal, Quebec, had spent months searching the country for female players with the right mix of talent, guts and ambition. Ann Greenwood (guitars, Chatham, Ontario), Caroline Soucy (guitars, Quebec City, Quebec), Tracey Hilderley (drums, Sault Ste. Marie, Ontario) and Lori Hoppenheit (bass, Winnipeg, Manitoba) fit the bill perfectly and, after their very first session together, the girls could all sense that their union was the beginning of something extraordinary, even magical. It did not take long for Stiletto to begin recording demos of their melodic, yet edgy original songs and they quickly became known for their electrifying stage show and musical prowess. Fronted by Carole’s incredible stage presence and scorching vocals, Stiletto toured extensively across Canada and the United States. They brought down the house at famed clubs such as Toronto’s Rock-N-Roll Heaven and Gasworks Tavern as well as Hollywood’s Whisky a Go Go and Roxy Theatre, not to mention the many, many other places in between. It seemed that no matter where they played, the reaction was the same: people would enter as skeptical, crossed-armed connoisseurs of rock and by the end of the night, they would leave – minds blown – filled with the kind of excitement you can only get from witnessing an epic performance – and epic is what these girls delivered night after night. Stiletto continued to tour and record until the late summer of 1992, when Carole left the band for other pursuits. Though, until now, their music had not made it to wide release, the girls of Stiletto were, and still remain, pioneers in the story of rock. Their legacy was to begin paving the road for the next generation of female musicians and songwriters who continue to dominate today’s music scene. It was once written about Stiletto that they are “The greatest all-female band you will ever see or hear.” Their fans remember… and they agree.