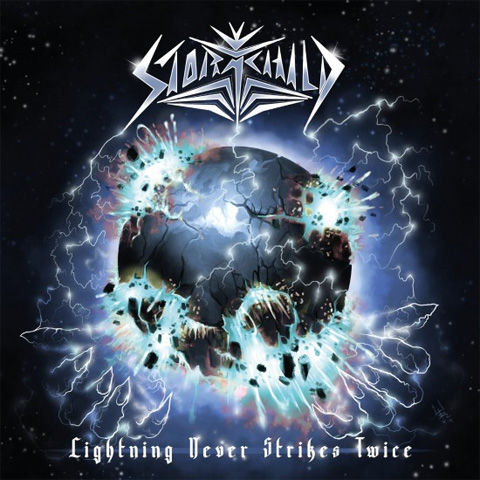 The roots of Stormchild (from Bolton in Lancashire) go way back to the year 1979: The band initially started as a group of friends who decided to put a band together with the aim to look and sound different from the usual bands at the time. They wrote their own stuff from the start and were really ambitious. Stormchild built up their following and fan base by playing live and the music press surely took notice of the band with good reviews in Kerrang!, Melody Maker and Sounds. The band were quite melodic and were influenced by bands such as UFO, Sweet, Rainbow, Ozzy, Van Halen and so on. The band only released one single, Rockin Steady, in 1982. This was however never really officially release as they only made 50 copies trying to attract a producer and a record label. The single nowadays is one of those top 5 hardest Nwobhm singles to obtain. Instead of attracting a label the band broke up but drummer Chris Mitchell never stopped playing and has been doing session works and playing live. So nearly 40 years after the band broke up they returned with their debut album recorded in Kent with Chris Tsangarides as producer. NWOBHM fans need this especially those who love a melodic mixture of hard rock and heavy metal. So fans of Praying Mantis and Saracen take notice.