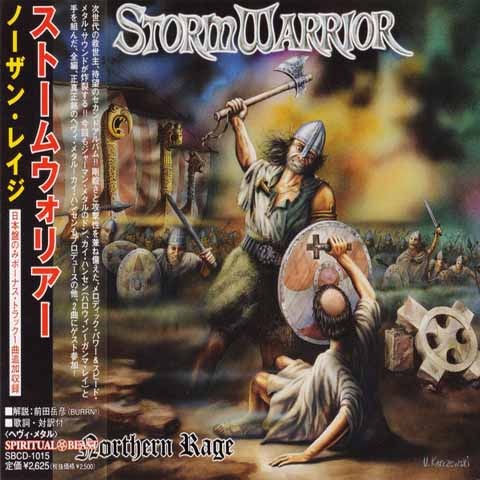 Japan press with OBI-strip and one bonus track

Do you remember back in 1986 when you heard a great metal album for the first time it would definitely give a lasting impression that holds on to this day. Were you fond of the European speed metal scene, especially bands like Helloween, Running Wild etc then this is for you because Stormwarrior sound exactly like they are from this era. Their second full-length album really has all the ingredients that made good old Helloween so enjoyable: a never stopping speed-riff-assault, excellent leads and soloing and harsh yet melodic vocals. Lead vocalist and guitarist Lars Ramcke (aka Thunder Axe) is definitely more Hansen than Kiske and knows his vocal range. In addition, he takes responsibility for the songwriting and surprisingly is the only remaining member of the band’s first album line-up. Yes, the music on here is very traditional speed metal, there’s not a lot of variation and the songs follow the common verse-chorus-verse-chorus pattern but with that kind of music it works damn well. The choruses are all extremely catchy and much in the same vein as Running Wild’s. At times, this speed-offering demands some serious headbanging. Just listen to the opener Heroic Deathe. This thing starts fucking fast and remains for almost five minutes at that pace. Glorious speed metal. There’s a long guitar duel right after the second chorus and at the end Kai Hansen jumps in doing some duet singing with Lars. The main difference to the band’s debut album is that they have put some epic power metal moments in few songs in order to create atmosphere. All the lyrics on Northern Rage deal with viking mythology. The booklet includes additional notes to every song, explaining mythological terms like the Sigrblot and the attack on Lindisfarne. ‘Northern Rage’ is essential for everyone who enjoys Helloween’s Walls Of Jericho, early Running Wild, the first three Blind Guardian albums or traditional heavy metal in general. This Japan pressing includes a bonus cover version of the Oz classic ‘Turn The Cross Upside Down’