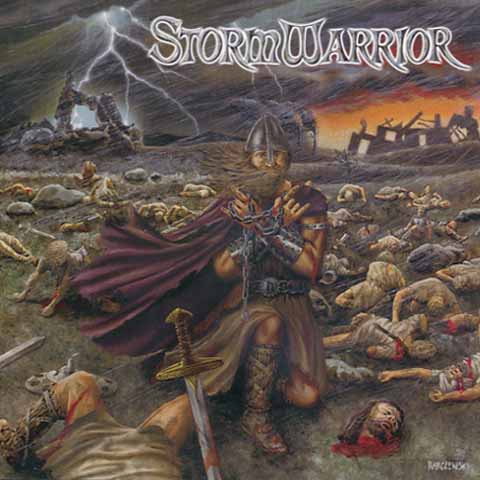 Do you remember back in 1986 when you heard a great metal album for the first time it would definitely give a lasting impression that holds on to this day. Were you fond of the European speed metal scene, especially bands like Helloween, Running Wild etc then this is for you because Stormwarrior sound exactly like they are from this era. We are talking about fast, no hold barred, German speed metal. The songs are mostly fast paced, with thundering double-kicks drums, tightly woven dual-guitar harmonies and nice aggressive vocals, clear and with a lot of range. The talent is definitely there, the solos simply shreds, great performance overall. The production by Kai Hansen is crisp and powerful, but not to polished; it gives a vintage feel to the music. Their main strength is to write great songs with memorable hooks, that will remain in your memory only after 2-3 listens. I can’t find a single fault with this record. Yes this stuff has been done before. It is not overly original, but these guys do it with so much enthusiasm you are forced to bow to the greatness of their work here. Guest appearance by Kai Hansen on vocals and guitar on Chains Of Slavery and Dirk Schlachter does the guitar solo on Death By The Blade

Track list:
1. The Hammer Returneth-intro
2. Signe Of The Warlorde
3. Sons Of Steele
4. Bounde By The Oathe
5. Deceiver
6. The Axewielder
7. Deathe By The Blade
8. Thunderer
9. Iron Prayers
10. Defenders Of Metal
11. Chains Of Slavery