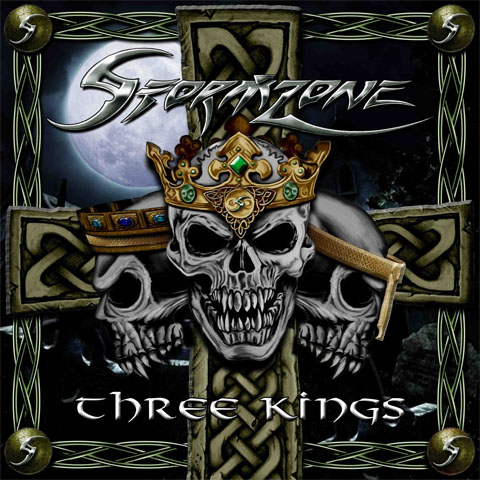 Back in 2007, I was blown away by a handful of unexpected tracks that seemed to come immediately from the melodic Metal Heaven with an exceptional singer, all enveloped in a work of art beautiful cover. The name of that band was Stormzone, hailing from Northern Ireland, the eleven songs were picked-out of a great album, with plenty of tasteful guitars and some slight AOR influences but, also and mostly embellished with a strong NWOBHM flavors and the disc was named Caught In The Act, a title and a music style that brings back good memories of the golden era (Praying Mantis/Cloven Hoof) and the beautiful Pterodactyl painted on the sleeve was signed by none other than Rodney Matthews. Singer here is the excellent ex-Sweet Savage main man, Mr. John Harv Harbinson and I think that his huge vocal performance helped him on getting the job of frontman in the revamped but ephemeral line up of Fastway (with also John McManus on Bass). Unfortunately i was less enthusiastic about the bands second and third album, the band had neglected their melodic and even Harv seemed to be less striking, unfocused and overstretched. Im glad to say that the band seems reborn with their fourth album, Three Kings. They have a new line-up and they have found their dynamic again and the album is full of melodic metal tricks that are as impressive and infectious as their debut album, Caught In The Act, was back then, and maybe eventually heavier. Indeed Three Kings is a strong return to their roots, but most of all to a song quality crafting process before anything else. The production is also much better and sounds like a million pounds creation so overall this is a solid album full of great cuts where the vocals takes the lions share, a great collection of well-crafted riffs that sounds like a profession of faith for the glory of Heavy Metal and the track Bang Your Head is possibly their new anthem. Utterly recommended.