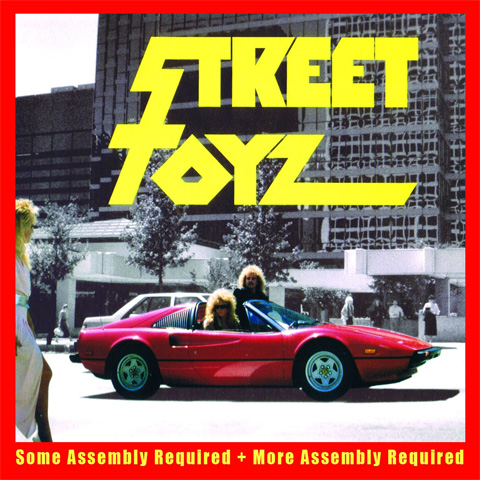 Street Toyz plain and simple was a band in Overdrive! Like it or leave it, they raised the bar for every band that played the Dallas scene…and then they shut that bar down. Other bands took their lead from the roadmap that Street Toyz paved; their professionalism was second to none, their product rivaled that of the majors, and their live show…well that was the cherry on top of the sunday. In the summer of 1985, Jimmy K Simmons and John Leasure formed Street Toyz (The original working name for the band was Soakin Wet). John and Jimmy eventually moved to Dallas, Texas, which would ultimately become home base for Street Toyz from 1986 on. Street Toyz also kept good company with other talented musicians. Down the hall was a newly formed band called Tracy Lords (later changed to Lord Tracy). Tracy Lords/Lord Tracy was made up of Terry Glaze (fresh out of the band Pantera as their frontman), Barney Wolfe, Chris Craig, and Jimmy R. To this very day, I can still remember the guys in Lord Tracy playing Piranha and it bleeding through the walls we shared…sometimes it was a competition as to who could out play or play louder than the other guys. In 1987, Street Toyz entered the Planet Dallas Recording Studios and recorded Some Assembly Required. One guys who took notice of the band was Madd Maxx from ZRock Radio. He saw us play at one of our many performances at Dallas City Limits and thus began a long beloved relationship between Madd Maxx and the band. He took such a liking to the band that he was playing every one of our tracks in regular rotation; this was huge considering that ZRock was THE metal radio station for the entire US at the time. We enjoyed the ride and a ride it was. And here it is, twenty-five years later, and thanks to this album we get to prolong and relive that memory just a little bit longer. Tracks 1-5 on this album release were transferred directly from the 25 year old, well-preserved master reels. Tracks 6-8 featured myself, Jon Leasure, Michael Layne on drums, and Russell Davis on bass and this was the final (and perhaps) the best and most cohesive version of the band. The last two tracks (9 and 10) are just a little thrown in bonus which is Bo Bullock on vocals, myself on guitar, Chris Craig on drums (I can’t remember the bassists name…) and Jimmy R. laying down some slide. We hope that you enjoy these tracks as much as we enjoyed creating them, and we thank everyone of you that was there that helped us live out our dreams and those of you who are now carrying on the legacy by keeping our music alive in your hearts. – Jimmie K. Simmons