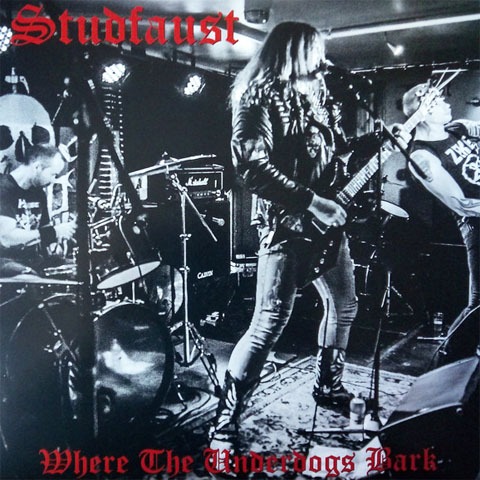 Studfaust -Where The Underdogs Bark mcd

At the very beginning of the 90s, Norway was the homeland of Black Metal, with almost everyone using corpse make-up, heavy spikes and leather clothes and even some criminal actions occurred back then. Ok, ok, I understand what all of you, my nephews and nieces will say, but the bigger question to me is: why some former members from ancient bands try to do something extremely different from what we are used to hear from them? Yes, this question strikes me when I hear bands from former members from earlier Black Metal bands, and it’s the very case of Studfaust, that have Bard Faust (former Emperor drummer), Stud Bronson (former member from Old Funeral), and Pete Evil (from Blood Tsunami), and the result is a mix between Punk and Metal, in the same vein from old Mothread, Tank and Warfare. It’s tough and raw in terms of sound production, like the bands mentioned above, with a quality that all can understand what is being played, but the raw feeling of earlier Metal Punk mix is bitter and present during the seven tracks. Half Human Half Dynamite, Where the Underdogs Bark, Street Judges Gavel and 1980s Ladies are the best songs of the album, and the energy and aggressiveness is extremely tough.

Track listing:
1. Half Human Half Dynamite
2. Where The Underdogs Bark
3. Hell Is Full
4. Street Judges Gavel
5. Erection Of The Egoist
6. The Devil Of Mine
7. 1980s Ladies