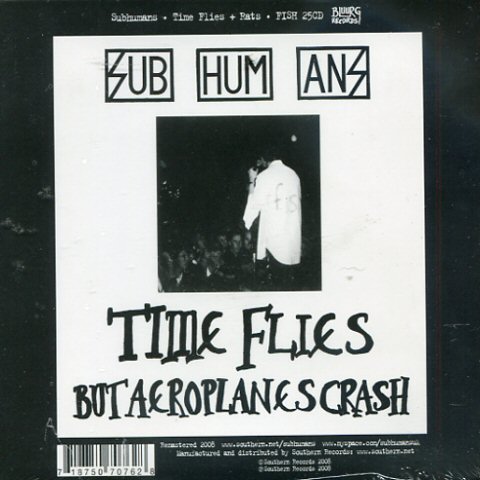 Remastered 2008 release in digipak featuring two albums from The Subhumans.

Each and every Subhumans release up to and including the Rats ep were exceptional records, all 7 Ep’s, 12 maxis and Lps were sublime moments of punk-genius. Save for the early 7’ep’s now found bunched beautifully together all had a distinct and different sound from the previous and next release. So its strange, not-in-a-complaint-way, that “Rats”(’85), a peak release, and “Time Flies But Aeroplanes Crash”(’83), an anti-peak release, have been brought together, even though the incredible, mind-boggling “From The Cradle To The Grave” had been released in-between. They sound notably different from one another and are definite distinct entities, but hey, what’s there to not like about that? Do yourself a favour and groove to those different flavours. You can really hear the transition in progress from the first track on the album, Get Out Of My Way which is fast and abrasive to songs like Labels and Rats.This makes it a combination of both grating punk rock and social awareness that blurs the boundaries that you don’t really see on any other Subhumans release. Despite the songs getting a little slower and the lyrics a little more intense, the album still flies past rapidly (even for a punk record) and has all the anarcho-cliches found in bands at the time. If you’re new to the Subhumans I’d recommend The Day The Country Died or EPLP to begin with as they are the popular and edgy releases that get everyone going mad at gigs. However, Timeflies/Rats is a fantastic piece of anarcho-punk.