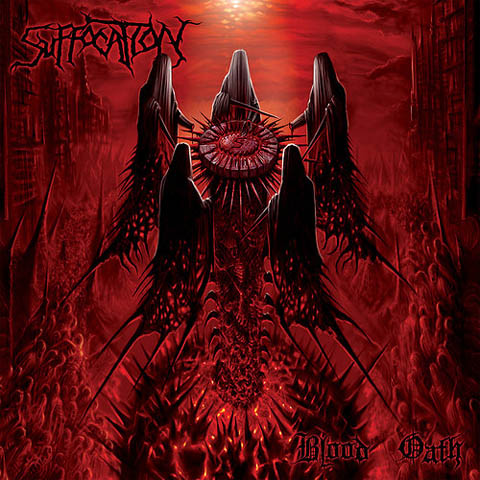 American death metal bands have been seriously outnumbered by Scandinavian death metal bands since the mid-’90s, but let’s not forget that during the early years of death metal, some of the most important bands were from the United States, including pioneers like Obituary, Death, Slayer, Cannibal Corpse, Necrophagia, and Deicide. And when it comes to technical death metal, there is no denying how influential American death metallers Suffocation have been since the early ’90s. Suffocation’s 19th anniversary came in 2009, and this 2009 release can be considered their 19th anniversary album. It’s safe to say that when Suffocation’s original lineup was formed back in 1990, the last thing they had on their minds was a 19th anniversary; death metal was so extreme, so left-of-center, so blistering in the late ’80s and early ’90s that those early death metal bands weren’t exactly thinking in terms of longevity. But Suffocation’s influence endured, and Blood Oath offers a vicious dose of the stubbornly technical death metal they are known for. Suffocation, like many other long-running death metal bands, have had their share of personnel changes over the years; on Blood Oath, their 2009 lineup consists of Frank Mullen on vocals, Terrance Hobbs and Guy Marchais on guitar, Derek Boyer on bass, and Mike Smith on drums. Mullen’s deep Cookie Monster growl is as convincing as ever, and this 40-minute CD is the work of a band that clearly hasn’t mellowed with time. Blood Oath doesn’t break any new ground for the death metal veterans, but if this album is predictable, it is also solid — and it is good to see Suffocation continuing to take no prisoners after almost 20 years in the mosh pit.