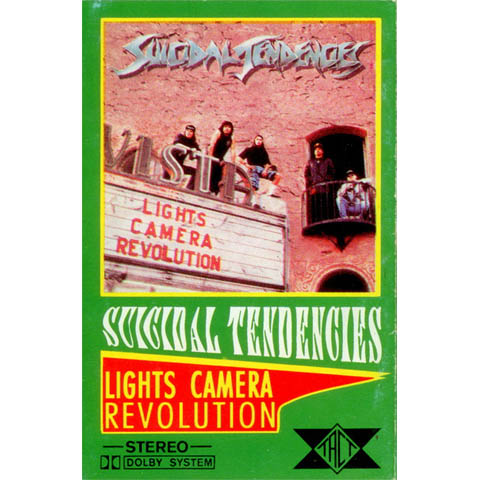 Poland is probably the country that had the most record labels in the world that only released cassettes. But even though there were lots of labels the market was still small as they only printed these for their own market inside of Poland. And a label in one town maybe lacked the distribution for another town and so on. A Warzaw or Krakow label might print more copies of a tape then labels from a smaller town. So even if there are thousands of releases you will notice how rare some are if you start to try to list the catalogue number of one particular label. Some cassettes just rarely shows up. One of the bigger cassettes labels were Takt Music in Warsaw. They started in 1990 as Tact then changed name in 1991 to Takt Music who existed up until 1994 before becoming a major pressing plant in Poland and changing the name to Takt.

After recording some definite gems in the late ’80s, Suicidal Tendencies triumphantly entered the ’90s with one of its best albums ever, the commanding Lights…Camera…Revolution! Not since the mid-’80s had the L.A. band sounded this confident, focused and inspired. “You Can’t Bring Me Down” and the Motörhead-ish “Get Whacked” demonstrate just how much fun Suicidal can be, but most of all, the metal-oriented album is dark, angry, and troubling. The Angelenos already commanded an incredibly devoted following, and powerful offerings like “Send Me Money” (a gut-level, brutally honest attack on television evangelists), “Give It Revolution,” and the dark-humored “Disco’s Out, Murder’s In” brought even more listeners aboard. This is an album that no Suicidal fan should be without. This Polish pressed cassettes as a totally different running order