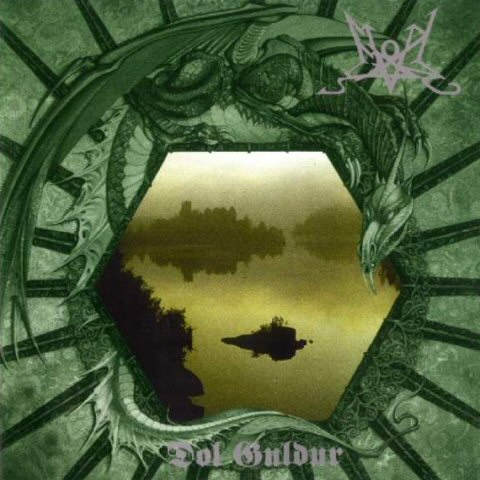 It’s pretty hard to explain exactly why this album- or any of the following Summoning releases- is any good. Minas and Lugburz are both fairly fine albums full of interesting black metallish riffing, and while you’d expect a symphonic turn to be for the worst, it seems that adding a heap of extra synths and fruity (loops?) drums was one of the best things Summoning ever did. Indeed, Summoning are a strange band in this respect. Everything about this album- this band- should fail- the repetition makes Sunn O))) blush, the synth quality makes you wish they used Varg’s MIDI stuff instead- but it’s just so good. It’s a fine line these guys tread here, and to be honest I’m amazed that they haven’t released a real stinker of an album yet. Still, while I imagine there will be a time when the sound that these two Austrians have built comes crashing around them, it hasn’t happened yet. It almost seems like perhaps Summoning sound good because of, not in spite of their limitations. And that’s particularly evident in this album. Probably more so then any other Summoning album, there’s one formula here that’s plugged at relentlessly. Incredibly simple drum machine action, heaps of snare and kick- and always somewhere around 90bpm- three or so good quality but simple (and way back in the mix) guitar riffs per song (the songs average 10 minutes each, by the way)- and a heap of bleating, machine like synths establishing some vaguely medieval/ominous/melancholic themes. The synths, for one, offer a lot of comparisons to Zelda, Golden Sun and other J-RPG soundtracks. Not the most promising combination, then. The best way to sum up this album is “far, far more then the sum of its’ parts”. There’s two ways of looking at it; either Summoning stumbled upon this formula; unwittingly shitting out a diamond- or alternatively, Summoning knew exactly what they were doing. Based on the other albums by these guys, I’d say it’s the latter. Yep, Dol Guldur shouldn’t be any good- and I guess in some ways it isn’t- but it delivers a listening experience that few other albums can compete with. Get it, just be prepared to give it some time.