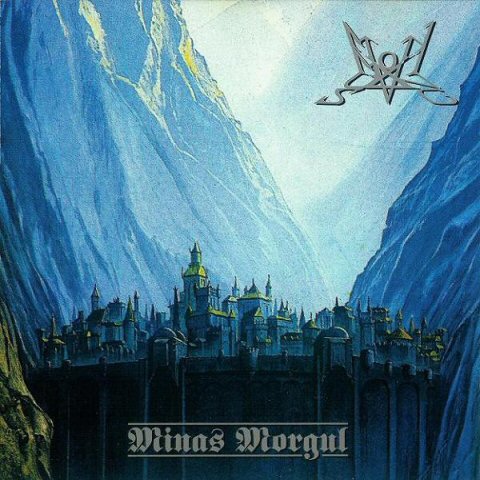 “We see the drop of our drummer as the start of the real Summoning style. The real drummer was always the disturbing element in our music. Real drum rhythms do not suit to the music of Summoning at all. The drums of Summoning focus manly on deep tom toms, kettle drums and marching drum; played in a very slow way. Any boaster breaks or blast beats would totally destroy the feeling. I am really bored by the standard Hi Hat, bass drum, snare rhythms which didn’t really change since the beginning of rock music. I want to create rhythms that don’t rock, but spread the feeling of ancient times.” ~Protector, in an interview in 2001

Indeed, this really is the first release that really gave us the true style of Summoning today, but at the time they didn’t really know that; what that essentially translates to in terms of the changes made from the foundation of Lugburz on Minas Morgul is a focus on more keyboards and slow-building songs. Right away, the ominous build of “Soul Wandering” and the electronic drums- with no intention to sound real in the slightest- makes you realize something’s different here. I want to say that Summoning made the guitars more of a backdrop for the keyboards because that was certainly their intention but although there’s even less of a focus on detail in the riffs than there was on Lugburz, their position in the mix and the fact that they can still function fairly properly as black metal riffs because the style intrinsically lacks that sort of detail causes them to frequently win over the keyboards for the most dominant element in the music when they’re in action. This is good news for most people into more traditional black metal because this is probably the closest to black metal they’ve ever sounded in their “true” incarnation, and it also happens to be one of their more concise and riffy albums. Songs like “Through the Forest of Dol Guldur” and “Lugburz” (you put the title track on the wrong album, guys) are pretty much black metal through and through, even the drumming is more conventional and less Summoning-esque in its programming. Sometimes the drums even do something resembling blastbeats. It makes for one of Summoning’s most varied albums, even if it doesn’t quite capture the same atmosphere that some of the later albums would. There are a few really goofy things about this album that should make it seem like a really cheap, amateurish and inferior album from a third-rate band, but the superior compositional skill and the unique and plentiful elements at play give it something of a timeless quality. Despite Minas Morgul’s interesting qualities as a diverse sort of hybrid/transition album, this is just the basic setup; they would build on the foundation set in ways I find much more captivating, but this is still just a really good, sort of experimental black metal album that could feasibly occupy a spot in any decent metalhead’s collection. However, although the quality of Summoning albums tends to fluctuate (albeit fortunately not very wildly), the core features that makes up their sound consistently mature as they go on; this is an ambitious and entertaining album, sure, but it’s also an immature one. They’ve already pinned down something great, and this is only the beginning.