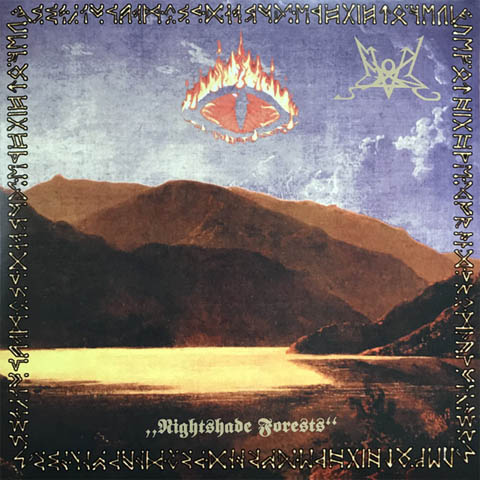 Summoning can not really be called black metal, except for their debut album. Whereas black metal is (or should be) ugly and guitar-driven, Summoning’s keyboard-based music is beautiful and atmospherical. Only the harsh but still strangely well-fitting vocals remind of Summoning’s roots which lay partly in the soil of black metal. ‘Nightshade Forests’ should, according to Summoning, be seen as a part of the Dol Guldur album, from which these four songs were dropped obviously due to the massive duration that Dol Guldur would have reached in its entirety. This album is different than Dol Guldur, though, mostly because of the different sound and production. The guitars, which this time play a very small role in the songs, are mixed to the background so that they are virtually just low buzzing left in the shadow of the multiple keyboard-layers, bombastic percussion and the gnarling vocals. Because of this, Summoning’s characteristically low “metalness” is reduced to utter minimum on this album. But main point is not whether Protector and Silenius are playing metal or not – it is the songs. I simply can’t figure out anything negative to say about the songwriting or the decisions made in the arrangements. Glorifying words I could never find enough. Like masterpieces often do, this album plays with your imagination, awakening inner landscapes: majestic, snowcovered mountain views, an endless morning horizon at high sea, vast and misty spruce forests at dusk – whatever your imagination is able to create. Perfect music for wandering in the nature. If you like beautiful and atmospherical music and have no problem with black metal-styled vocals (or just liked Summoning’s previous efforts), this album will not be a disappointment.

Track list:
1. Mirkwood
2. Kortirion Among The Trees
3. Flesh And Blood
4. Habbanan Beneath The Stars