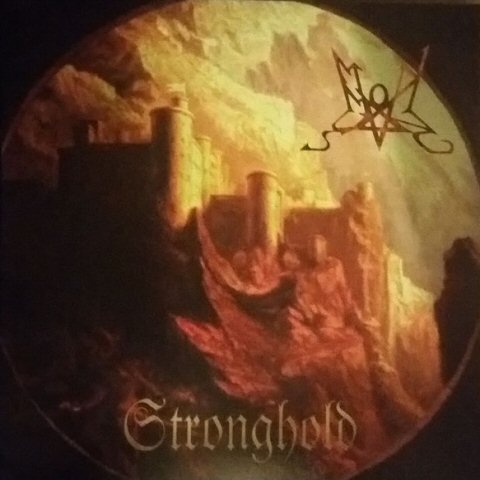 Summoning has always been somewhat of an oddball band in the field of black metal. It’s not totally incorrect to call them a symphonic black metal band, but at the same time, they don’t really fit the tag associated with that corner of the genre; at the same time, it’s far from regular raw black metal. The band’s debut was rather raw, but held an aesthetic that would stick with the band through its career: the Tolkien vibe, of course. Things really hit a new phase with Dol Guldur, where the band began to incorporate keyboard-based elements into the sound, making for a more soundscape-esque, epic atmosphere for the already highly ambitious music. Stronghold takes the formula that came to fruition on Dol Guldur and totally forges it into a new chapter for the band; this is the essential Summoning recording, where their layered and oft-symphonic arrangements shine with a sense of freshness, passion, and where the band truly came into their own style. While the band’s previous release hinted at this type of thing, few of us dreamed it would be on this grand of a scope. Right from the beginning of the album, listeners are swallowed by radiant, golden ambience and an impalpable autmnal atmosphere. All of the drum beats are programmed here, and nearly all of the arrangements are based around the keyboard and synth compositions. Generally, I would scorn this type of thing; but Summoning had their heads on straight when composing these songs. Rather than programming the drums strictly for the sake of timekeeping, tribal-sounding rhythms power the songs; pounding toms, exotic touches such as bells and tambourines, and a deep, echoing bass drum propel the songs at generally slow speeds, but never become boring. The patterns never really remain the same either, so there aren’t many problems with repetition through the album’s course. Some of the backbeats have a near-folkish flair to them, which really brings the Tolkien vibe to life in combination with the guitars. On a level of songwriting, Silenius and Protector have made leaps and bounds in their skills. Each song is now given proper time to reveal itself and grow on the listener; the keyboards are meticulously matched to accent and play off of the guitar lines, such as the the bold brass and medieval tremolo lines of “The Rotting Horse on the Deadly Ground.” Structurally speaking, more progressive touches are taken; most songs have a very open, narrative feel to them, almost cinematic. More often than not, a keyboard or synth line sets the main pace for the song, and the layering from there begins: the guitars enter with a melodic line; the drums enter at a low, dynamic volume; and suspense builds until a grand, explosive climax, whereupon the cycle repeats itself. This may sound formulaic in text, but there’s a great deal of variety in each song to prevent it from becoming boring or repetitive. With the amount of mood and atmosphere given off, the listener almost totally becomes lost within the textures offered. Of course, the musicianship is one of the most important aspects of any band, and Summoning do not fall short, despite the pompous, overwhelming scope of the music. The extravagant keyboard melodies sweep over the arrangements in a sense of grandeur, and by no means are these one-minded, cheesy, or boring melodies; “Long Lost to Where No Pathway Goes” and the slightly melancholy “The Loud Music of the Sky” use multiple layers of strings for a huge, epic wash of sound that is rapturous, while songs like “The Rotting Horse on the Deadly Ground” and “A Distant Flame Before the Sun” make use of strong, deep brass sections for a battle-like backdrop. Most of the guitars are fairly simple chord structures, tremolo melodies, and palm-muted notes that maintain a neo-folk, medieval feel. Essentially, they serve the purpose of backing the keyboards, but there are some memorable moments on their own ground, and aid the huge, mountainous atmosphere wonderfully. Silenius and Protector switch vocal roles on this album, as they always have; Protector has a rather mild raspy scream that is passionate enough on its own, but doesn’t possess much of anything in the way of ferocity or venom; not that it’s needed, in his case. Silenius, on the other hand, is my personal favorite; he was in Abigor, so you have an idea of what to expect. His vocals are much harsher and have a more “shrieky” sound to them, which works perfectly on the brave “The Rotting Horse on the Deadly Ground.” He also has a bit more power and projection than his counterpart, but doesn’t appear as often. When he does, though, it’s a very special thing. Lyrically, you already know what to expect: Tolkien. All things Lord of the Rings, really. Some of the song titles and lyric passages are taken straight from the book, in fact. Whether it be the dark plains of Mordor, epic battles, or elves, Summoning prove that Tolkien can indeed be metal and do it well. Stronghold’s production brings the atmosphere to life: each instrument, vocals included, are soaked in heavy reverb, but never get to the point of where things are indecipherable or clusterfucked. Things remain surprisingly clear and easy to decipher, even with the heavy layering in keys. For those looking for some left-of-center black metal that doesn’t explore the tattered ends of avant-garde, or just someone who has a passion for Tolkien, give Stronghold a listen and let the atmosphere take over.

Track listing:
1. Rhun
2. Long Lost To Where No Pathway Goes
3. The Glory Disappears
4. Like Some Snow White Marble Eyes
5. Where Hope And Daylight Die
6. The Rotting Horse On The Deadly Ground
7. The Shadow Lies Frozen On The Hills
8. The Loud Music Of The Sky
9. A Distant Flame Before The Sun